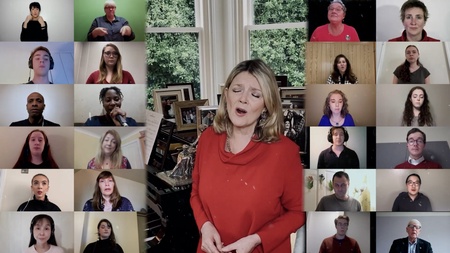 A University of Aberdeen-led campaign to bring the world together in song has received backing from Oscar-winning actress Dame Judi Dench and legendary composer Burt Bacharach.

Both have recorded supportive messages for the iSing4Peace global music project, which brought together singers of all abilities to perform in a charity single led by Scottish singer and songwriter, Fiona Kennedy, accompanied by the Royal Scottish National Orchestra.

Among the hundreds of participants from around the world who each recorded their own version of the Song, Stronger for the Storm, were, an 82-year-old services veteran, an NHS doctor and a sign-language choir. The project also gained the support of world-famous baritone Sir Willard White.

iSing4Peace was launched in June with the aim of providing opportunities for people to come together through music at a time when performance opportunities were severely constrained as a result of the Covid-19 pandemic.

It built on the successful iPlay4Peace initiative, led by the University of Aberdeen’s Neil McLennan and Edinburgh Napier University, but this year the project expanded to allow people to us an instrument we all have – our voices – to take part.

In the months that followed, the project captured the imaginations of people across the globe with support on every continent, apart from Antarctica, taking part. Their renditions of Stronger for the Storm, written by Royal composer Paul Mealor and lyricist Grahame Davies, together with Kennedy, were then crafted into a charity single by producer Calum Malcolm who has previous produced albums of Mark Knopfler and The Blue Nile.

Burt Bacharach described it as “a beautiful song with a strong message for these times”, while Dame Judi Dench spoke of the importance of coming together through music saying “during these really challenging months we’ve all needed some kind of lift to our lives - and music and the arts can do that”.

The charity single is supporting four causes also playing their own role in helping those affected by Covid-19 – The British Red Cross, The Royal Commonwealth Ex-Services League (RCEL), VSA and the University of Aberdeen’s Development Trust.

Fiona Kennedy said support for iSing4Peace had been outstanding. “When we began, we hoped that people would embrace Stronger for the Storm in the spirit it was intended – to unite with a common purpose during these continuing challenging times,” she added.

Each person who has performed Stronger for the Storm has added their own style and brought their own story, which has enriched the song with musical flavours from around the world" Professor Paul Mealor

“The response has been truly remarkable. To have stars of the calibre of Dame Judi Dench, Burt Bacharach and Sir Willard White recording messages of support for our global community choir is inspirational.

“But most important are the many extraordinary people from all over the world who have taken time out of their busy lives and jobs to rehearse and perform to become an integral part of this song, which I hope is full of hope.”

Paul Mealor, professor in composition at the university of Aberdeen, said that it had been heartening to see his music brought to life in so many different ways.

“Each person who has performed Stronger for the Storm has added their own style and brought their own story, which has enriched the song with musical flavours from around the world.

“It has been wonderful to see this grow from a concept developed right here in Aberdeen, developing on the international stage and attracting backing from some huge names in the arts industry.”

Stronger for the Storm aimed to capture the spirit of 2021 and many of those who took part in the charity single say it has been a highlight of an often difficult year.

Lena Izzat, an NHS Senior Cardiologist from South Wales, described the experience of coming together through music as ‘the silver lining of the dark clouds of Covid’.

“The song has a hauntingly beautiful melody and she feels like the words have been written for the times we live in,” she added,

Mary Whittaker from Lhanbryde, Moray, leader of sign language choir, Singing Hands, added: “To be able to translate a song, you need to be able to understand the meaning of the lyrics. Sometimes, this can prove difficult, but with Stronger for the Storm we found it very easy. We all agreed on what we thought it meant, and we all think it is an absolutely beautiful song.”

Stronger for the Storm is available to download as a charity single at Bandcamp.com