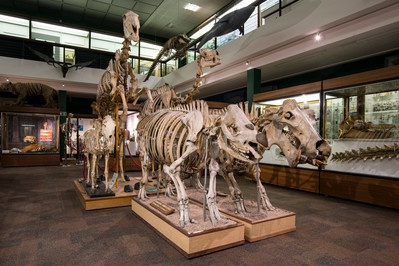 A north-east museum which has been a staple of school trips and family days out for almost half a century is seeking the help of the public to celebrate its landmark birthday.

The University of Aberdeen’s Zoology Museum will celebrate turning 50 tomorrow (December 17) and is launching a Memories Project to gather the recollections of visitors over the decades as part of a year-long programme of celebrations.

These will culminate in a community art project featuring the memories, photos and videos submitted, which can recall experiences of visiting, learning, attending events or anything else which has captured the imagination of the public.

The Zoology Museum opened in 1970 to showcase University collections accumulated over hundreds of years of teaching and research.

It cares for an extensive range of material, worldwide in scope, which covers the whole of the animal kingdom, from protozoa to the great whales, and extends to more than 75,000 specimens.

Favourites with visitors over the years include the Sei whale skeleton, Japanese spider crab, elephant skeleton, often recalled as a mammoth, and Rani the Bengal tiger.

The collections have also provided valuable insights for the academic community and in 2013, the only egg known to exist of one of the world’s most critically endangered birds was discovered among items donated more than a century earlier.

It is the only zoology museum in the north of Scotland and has provided an opportunity for local people to see zoological collections, for free, within their own area" Susan Curran

Neil Curtis, Head of Museums and Special Collections at the University of Aberdeen, said: “The Zoology Museum has captured the imaginations of children and adults alike who have enjoyed looking at the taxidermy, skeletons and models of some of the world’s most impressive animals.

“It is also an important place for understanding evolution, extinction, how we classify the living world, and what we can do to conserve biodiversity and endangered species.”

Susan Curran, Exhibitions and Public Programming Manager for Museums and Special Collections, added: “Over the decades the Zoology Museum has provided a great bridge to the local community. It is the only zoology museum in the north of Scotland and has provided an opportunity for local people to see zoological collections, for free, within their own area.

“We know a lot of people will have memories associated with it from visiting as part of a school group or with their families.

“2020 has shown more than any other year the import role museums and other spaces for reflection play in our lives and, while we sadly can’t yet open, we hope people might be able to take a few minutes out of their day to think about what it has meant to them.

“These can be recent memories or those from its early years, we’d love to gather recollections from across our 50 years. These will then be incorporated into our 2021 projects, culminating with a community art installation.”

If you’d like to share a memory, photo or anything else connected to the Zoology Museum, please email UOACollections@abdn.ac.uk