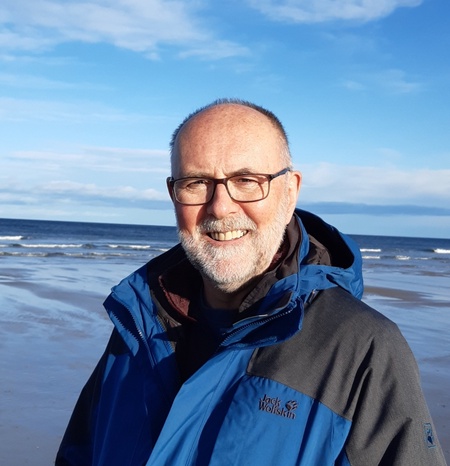 John McAteer has enjoyed a successful return to the University of Aberdeen, 40 years after completing his undergraduate degree.

The reason I returned to university was to see whether, after over 30 years in the oil industry, I was capable of learning something completely different" John McAteer

John, 63, from Oyne, Aberdeenshire, took a trip down memory lane – even returning to the same building he had studied in to gain his Geography degree in 1979.

Following a career in Oil & Gas, John has now graduated with an MSc in Archaeology of the North.

“I had attended the University of Aberdeen some 40 years earlier and the Archaeology Department shares the building in which I once studied Geography. So there was an element of nostalgia involved plus the amusement that I was back studying there after so long. Needless to say this meant that many of my conversations began with ‘back in my day….!’

“Several courses on the university website were attractive but I settled on Archaeology of the North because I thought it would better help me understand the landscape I'm living in - which it has. Another key factor was that it was continuous assessment through essays, participation and dissertation. I promised myself a long time ago that I would never sit another exam and was determined to stick to that!”  Archaeology might not seem like an obvious next step for someone who had worked in the oil and gas industry for the last three decades, but John says he wanted a change.

“The reason I returned to university was to see whether, after over 30 years in the oil industry, I was capable of learning something completely different. Thankfully I was, but it was certainly a very demanding course. I was incredibly impressed by the somewhat younger students - their enthusiasm and commitment particularly when many of them were having to work to support their studies.”

John had to delay his studies for health reasons but there were plenty of highlights thereafter.

“One difficulty I had not anticipated was having to have a full knee replacement after the first semester. This meant that I had to drop out of the course for a year which was very irritating.

“My first pint in the St.Machar bar after 40 years was definitely a highlight, as was the Orkney field-trip. Also, doing a presentation on the Brough of Birsay with the snow coming down was quite an achievement. Whether anyone could actually hear me over the sound of the wind is debatable, but all were complimentary afterwards. Of course they may just have been relieved to escape to shelter.  “It was difficult to return to structured education with the requirement to read a large amount of material and adopt a very different style of writing to what I had become used to. However the members of staff were all extremely supportive and always tolerant of my tangential and often irrelevant comments in seminars.”  Following his graduation, John is looking forward to volunteering for local archaeological digs and maintaining connections with the Archaeology Department. However, he says he will leave it a few years before undertaking another degree, “my brain needs a rest!”.