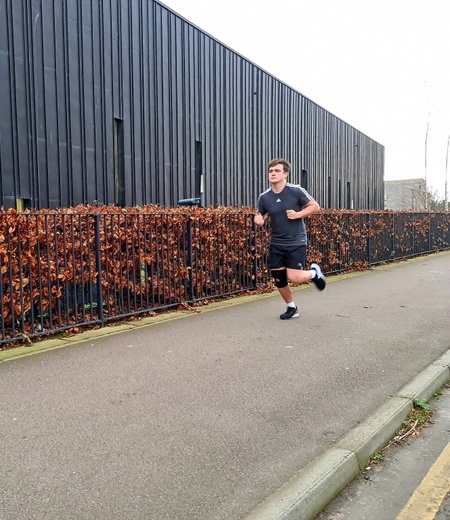 While many of us will be preparing to celebrate Christmas, Aberdeen student Kieran Fraser will be pounding the pavements around his Inverness home in a bid to complete his first marathon.

The final year accounting and economics student will be running 26 miles on Christmas Eve to show his support for dad Neil, who suffered a stroke in September.

Kieran had originally planned to complete a marathon alongside Neil but following his sudden collapse, he will instead take on a solo challenge to raise funds for Chest, Heart and Stroke Scotland.

Kieran said: “It was a devastating shock for all the family. My dad is only 52 and has always been fit and healthy. We’ve always walked and run together and completing a marathon had been a dream for both of us.

“When someone close to you suffers a stroke, you feel so helpless, particularly with Covid restrictions as I’m not able to visit him.

“I wanted to do something to show how much I am thinking about him and to recognise the huge effort he is making in his recovery.

“I’m also hoping to raise as much as I can for this amazing charity that has helped mine and other families through bad times.”

Kieran will be pushing through his own pain barrier as he is still suffering the effects of a cartilage injury in his right knee. He is also using his training to help him focus on his studies.

“I’ve always found running a great stress reliever,” Kieran added. “So with the difficulties with my dad and the pressures of uni work when it builds up, I love to just run and it helps relieve the stress a lot.

“Getting out three times a week on a long run has really helped me get through this time and I believe is actually helping me to catch up on my uni work as I feel in a much better place to work afterwards.

“I’ve also had great support from my friends and they’ve really helped me to get through this difficult time.

“While my knee injury is painful, it is nothing compared to the pain that thousands of families go through every year.”

Kieran is hoping his dad may be well enough to come home from hospital by Christmas but will undertake his Christmas Eve run regardless to highlight the devastating impact of strokes on family life.

Donations to Kieran’s marathon effort can be made at https://www.justgiving.com/fundraising/kieran-fraser