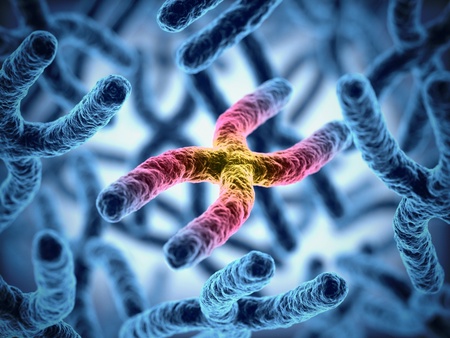 A new study on birds from the University of Turku in collaboration with the University of Aberdeen suggests that increased prenatal exposure to thyroid hormones could have beneficial effects on 'biological age' at birth.

Biological age refers to the ‘health’ of your body at birth, right down to the components of individual cells and it is thought to be related to health in later life and may even impact on life expectancy.

The environment we experience in early-life, even before we are born, is known to have major consequences on biological age. This is thought to be due to external effects on cellular ageing - often estimated by measuring sections of chromosomes known as telomeres.  Telomeres are the protective end caps of chromosomes and their length is a marker of biological age with shorter telomeres indicating older biological age.

While telomeres normally shorten with age, short telomeres at a given age predict higher disease and mortality risks. Prenatal exposure to maternal stress hormones as well as instability during embryo development have previously been found to result in short telomeres.

This new study funded by the Academy of Finland and the Turku Collegium for Science and Medicine, manipulated prenatal exposure to thyroid hormones using egg injection in an avian model.

Antoine Stier from the University of Turku (Finland), the main author of the research article explained: “The telomere biology of humans is closer to the telomere biology of birds than those of traditional laboratory models. In both human and birds, telomere length is measured in a minimally-invasive way from small blood samples.

This has broadened our understanding of the cellular ageing process and improved the potential for new anti-ageing therapies. " Dr Pierre Bize

While the researchers expected shorter telomeres in chicks born from eggs injected with thyroid hormones, they were surprised to find that those chicks actually exhibited longer telomeres right after birth.

“Based on the natural decline of telomere length observed with age in the same Collared Flycatcher population, we estimate that chicks hatching from thyroid hormones injected eggs were approximately 4 years ‘younger at birth’ than chicks hatched from eggs that were not injected with thyroid hormones.” adds Collegium Researcher Suvi Ruuskanen.

Although the molecular mechanisms underlying such effects remain to be discovered, the new findings suggest that prenatal thyroid hormones might have a role in setting the ‘biological age’ at birth.

Dr Pierre Bize from the University of Aberdeen explained further: “Prenatal exposure to maternal hormones has previously been suggested to influence ‘starting’ telomere length with potential long-term consequences on health and longevity. In this study, we manipulated prenatal exposure to maternal thyroid hormones using egg injection in a wild bird model and found that elevating prenatal thyroid hormones surprisingly led to longer telomeres in early-life.

“Consequently, prenatal thyroid hormones could have a role in setting the ‘biological age’ at birth. This has broadened our understanding of the cellular ageing process and improved the potential for new anti-ageing therapies.”

Stier adds: “Considering the interest and controversies surrounding gene therapy trials in humans to elongate telomeres as an anti-ageing therapy, this discovery opens potential avenues to better understand the influence of telomere elongation in animal models.”

The study was conducted on a long-term monitored population of wild collared flycatcher breeding in Gotland island, and relied on extensive collaborations with the University of Uppsala (Sweden), Lyon, Glasgow and Aberdeen. The study was published in Biology Letters from The Royal Society: https://doi.org/10.1098/rsbl.2020.0364