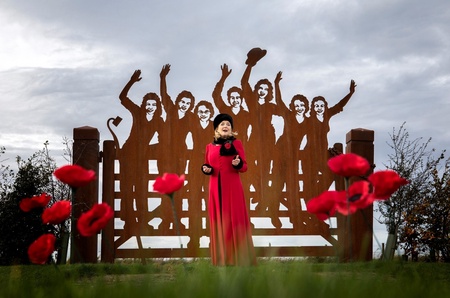 A Military Wives Choir and the famous baritone Sir Willard White are joining an 82-year-old services veteran, an NHS doctor and hundreds across the world who are lending their voices to a Scottish initiative aiming to bring the word together in song.

They have all supported iSing4Peace, a project developed by University of Aberdeen Director of Leadership Programmes Neil Mclennan, the project sees singer-songwriter Fiona Kennedy leading a global chorus on Remembrance Sunday.

Singers from around the world have been invited to perform and record a new work by Kennedy, royal composer Paul Mealor and lyricist Grahame Davies from the comfort of their own homes. It is hoped their song, Stronger for the Storm, will bring people together at a time when social distancing and isolation has affected so many.

This will then be crafted into a charity single by producer Calum Malcolm who has worked with Mark Knopfler, Simple Minds, Big Country and Blue Nile, to raise funds for the British Red Cross (Disaster Fund), the Royal Commonwealth Ex-Services League (RCEL), Aberdeen’s VSA and the University of Aberdeen’s Development Trust.

It is the latest musical venture for members of the Kinloss Military Wives Choir, which formed in 2012 and has since release four albums. But like so many performers, they have been forced to cancel more than 20 concerts this year.

Kinloss Military Wives Choir singer Lorna Alexander said “Music has been proven to help release feel good endorphins and helps with memory and lifts the mood, all of our ladies have said that often after coming to choir they feel lifted and ready to tackle the rest of the week, whatever it holds. “The lockdown brought about by Covid19 has meant that we have had to change how we operate. We haven’t all met in person since March, and like everyone, we are finding it hard.

“The cancellation of our events has also meant that the support we bring to others has had to go on hold.

“It was with this in mind that we were excited to read about the #iSing4peace project. A chance for us to support a project that benefits the military and do what we love to do, singing.

“The song is beautiful and reflective and a lovely way to feel part of the wider remembrance commemorations whilst benefiting the military community and we can’t wait to hear everyone’s contributions alongside the beautiful voice of Fiona Kennedy.”

Sir Willard White also spoke on the ability of music to bring people together in difficult times. He said: “Music is a very important and strong language for communication. One of the wonderful things about music is that it touches emotion immediately. Each tone that is uttered or played on an instrument strikes up a memory in each person.”

Kennedy’s version of Stronger for the Storm will premiere on Classic FM on Remembrance Sunday.

She added: “It is wonderful to see the range of recordings coming in to iSing4Peace from all over the world.

“At a time when it is important to remember what unites us, rather than what divides us, it is heartening to hear so many people coming together through the world’s universal language, music.” Those wishing to take part should visit https://www.abdn.ac.uk/stories/iSing4Peace/