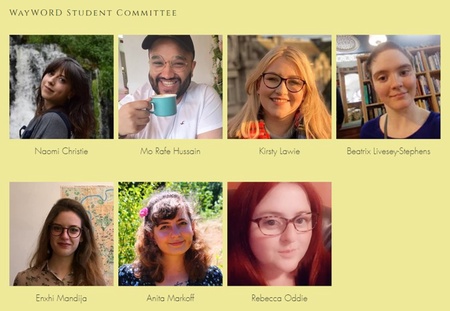 As Scotland's 'National Bard' once said, 'the best-laid plans of mice and men often go awry*', but a group of University of Aberdeen students weren't going to let Covid-19 prevent them from running a new literary festival this month (September 23 - 27).

While the WayWORD Festival may not be able to take place quite as originally planned, an exciting programme of online events has been created for the student-led literary arts festival.

From comics and zines to screenplay and comedy, poetry to narrative gaming, stencil art to novels, and song writing to spoken word, there is something for everyone – and it is all free of charge.

Organised by the University’s WORD Centre for Creative Writing, the festival features speakers such as international award-winning poet, playwright, artist performer and broadcaster Lemn Sissay, Eimear McBride who will read from her latest book, Strange Hotel, and long-time favourite with Word and May Festival audiences, Leila Aboulela, author of five award-winning novels.

The festival has been organised by a student and graduate led committee.

Kirsty Lawie, who has just completed an MA in Scottish and English Literature and is about to start an MLitt in Creative Writing, said: “The situation changed so fast that we had to come to terms with the fact that we were going to have to change the whole format of the festival very quickly.

“Initially we were disappointed as we had put so much work into organising the WayWORD festival to be an on-campus experience. However we adjusted to creating an online festival instead and now even more people will be able to enjoy the event, regardless of disability, location, work schedule, or any other factor. It has meant our festival will now have a much more diverse range of voices and an audience who otherwise may not have been able to make it to campus.”

Beatrix Livesey-Stephens, who will enter the third year of her Language and Linguistics degree later this month added: “I felt strongly that we should create events that are accessible for everyone, and it is so exciting that we are able to have captions and interpreters on board to provide BSL interpretation at all our events.

“I am delighted that the programme also features an interview with Lisa Li, a BSL/English interpreter who will talking about her experiences interpreting within theatre and performance art. Another highlight of the programme is a talk from Golnar Nabizadeh, who is a lecturer in Comics Studies at the University of Dundee. She will discuss the creation of the public information comics produced by her and the rest of the Dundee Comics Creative Space. These aim to raise awareness of health and social issues through an innovatively accessible medium – she will be focusing on the comic about bereavement.”

Naomi Christie, a graduate of both an MA in English Literature and an MLitt in Literary Studies, commented: “One of the highlights of the whole experience has been working with fellow students and graduates from a range of different courses across the University and learning from each of them. Everyone has brought their own unique skills and perspectives to the committee and I am grateful to have been part of that.

“This is such an innovative project – the festival programme is so diverse and has something for everyone. I think this is due to the fact that everyone involved in organising the event has different interests and are from different academic areas, from medicine to literature to film studies.”

Festival Director, Dr Helen Lynch from the University’s School of Language, Literature, Music and Visual Culture, said: “We are delighted to announce a fantastic programme of literary and cross-arts events as part of the University of Aberdeen’s 525 celebrations.

“This festival has only been made possible by the hard work and tremendous efforts of the student team who have worked tirelessly on this project. It is difficult enough to organise a festival without having to do it during a global pandemic which sees all your plans turned upside down! However, the team were extremely resilient and very quickly moved to making the festival take place as a virtual event. I am extremely proud of them all and what they have achieved.

“We have a great line up of events and I am sure there will truly be something for everyone in the programme.”

WayWORD is a student-led arts festival organised by the WORD Centre for Creative Writing, University of Aberdeen. Workshops, author events, panel discussions and performance nights are all FREE and live online, with BSL interpretation.

Although all events are free, registration is required. For more information and to register for events, visit https://www.waywordfestival.com/