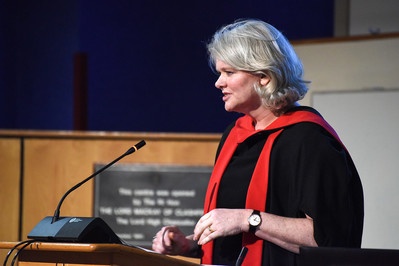 Our Prof Abbe Brown and Prof Marcel Jaspars (Chemistry) have been working together for years in their interdisciplinary engagement with negotiations at the United Nations towards an international legally binding instrument under the UN Convention on the Law of the Sea on the conservation and sustainable use of marine biological diversity of areas beyond national jurisdiction. They have attended intergovernmental conferences as members of the delegation of the International Union for the Conservation of Nature, have led intersessional events attended by country delegates, advisers and influencers in Aberdeen and in Edinburgh, and are active in the work of the Deep Ocean Stewardship Initiative.

An important part of the work has been public engagement, to raise awareness of the need to protect the oceans, the health benefits which can raise from working with marine genetic resources through the development of new medicines, and the need for an integrated legal approach to deliver a fair and workable solution. An important part of this was the collaboration leading to the Song of the Oceans, which was shared at a sell-out public engagement event at the Royal Society of Edinburgh (RSE) in January 2020. Building on this, Marcel and Abbe were invited to hold a “Tea and Talk” event in the RSE’s Curious virtual summer event programme which was free of charge and open to the public.

“Saving the Oceans with Law and Science” took place in two well attended sessions on 18 and 21 August 2020,  chaired by Sacha Carcassone of the RSE. Armed with cups of tea, Abbe and Marcel provided a short overview of the negotiations, their importance and some personal perspectives.  The online groups then together created very successfully the environment of an Enlightenment Salon  (with the added benefits of a Zoom chat panel). There were diverse and fascinating questions  and discussion - from theories of change and comparative values, to private rights and the commons,  to working with schools and intersections with steps to address plastic pollution  and global warming in the Arctic and Antarctic. Marcel and Abbe were delighted to have the opportunity to raise awareness of the work, be challenged on it, and  to encourage wider engagement and public activism in influencing approaches taken to the Ocean and the contribution this can make to all our futures. Thank you to the RSE and our participants.