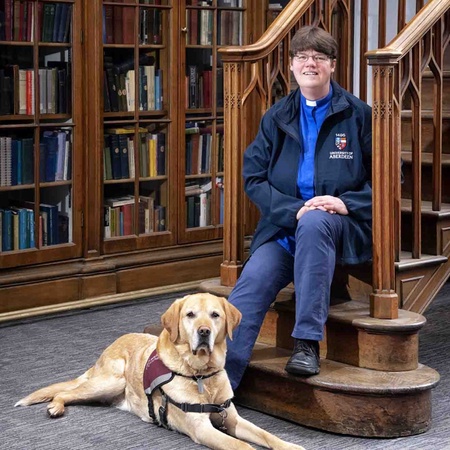 Reverend Mary Whittaker, who graduated from the University of Aberdeen with a Bachelor of Divinity in 2017, was speaking in a new video (recorded earlier this year) about her experience of studying at the institution ahead of Deaf Awareness Week (4-10 May).

Reverend Whittaker, who is assisted by her Hearing Dog, Scott, oversees a Parish which stretches from Perth to Shetland, taking in Aberdeen and the Outer Hebrides.

She says her first experience of a Deaf church as a teenager put her on the path had a profound effect on her.

She said “I grew up going to a hearing church with my family, but I did not understand. Then when I was about 18 years old I went to a church for the Deaf. They had signing for the Deaf and it was amazing and I thought ‘I want to do that!’ I decided to get life experience first and then become a Minister for the Deaf.

On her time at the University of Aberdeen, Reverend Whittaker, who is originally from Yorkshire but has lived in the north-east of Scotland for most of her life, says she loved challenging her brain and is proud of her achievements at the University.

“I think I was the first Deaf student Aberdeen University using BSL sign language to study divinity. I am really proud because there were lots of barriers which I finally broke through. It was really hard work. You have to be prepared to put in time, hard work and to fight. It was not easy. I loved doing research, writing and thinking. Also, I chose Aberdeen and I am proud to be part of Aberdeen's History.”

Reverend Whittaker says getting the correct support in place was crucial to her success at university.

“I had two supporters at University. One was signing and the other was a note taker. The signer was either an interpreter or CSW (Communication Support Worker). I watched the interpreter but I could not take notes at the same time so the interpreter and note taker were both there and that helped me a lot.

As for advice for current or perspective students at the University of Aberdeen, Reverend Whittaker’s advice is simple and she hopes more Deaf people will follow her lead.

“Do not be afraid to fail. It is not the end of the world.  I have failed but I just laughed it off.  I then knew my weakness, but it is important to keep going, focus on work, keep polishing up and improving. Accept it. That is life.

“I would like more Deaf people to become ministers or leaders.”

Rev Whittaker, is minister to the deaf congregation of St John’s Church in Aberdeen and the North Region of Scotland.

*Capital letter Deaf implies those who were born deaf or became deaf pre-lingually and use British Sign Language (BSL) as their first/preferred language.