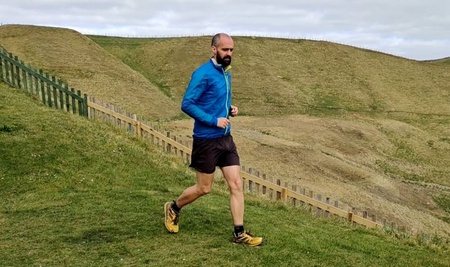 Mike Raffan, who lives near Collieston and is a team lead for the University’s server team, ran the extraordinary distance in just 27 and a half hours, starting at 6am last Friday (April 17) and finishing just after 9am on Saturday with short 10-minute breaks every so often. He mapped out a 100m route (16 laps per mile) in his garden.

Mike, whose achievement is made all the more impressive given the farthest he has been able to run in the past year is eight miles, has so far raised more than £1,300 for the Glasgow Golden Jubilee Hospital, as a thank you to the medical team who looked after him so well during his surgery.

Last year, however, Mike noticed that he was finding it hard to breathe while running uphill, as though there was a weight on his chest. Over time, it got harder and harder and he sought medical advice.

It's only been in the last two weeks I have started running properly again. I relied on muscle memory and stubbornness to get me through the challenge. " Mike Raffan

“It’s only been in the last two weeks I have started running properly again. I relied on muscle memory and stubbornness to get me through the challenge. The run was slow. Stopping every 50m to turn around was like doing a bleep test for 27 hours.”

*If you would like to sponsor Mike, please go to the following JustGiving page: https://www.justgiving.com/fundraising/isolationmike