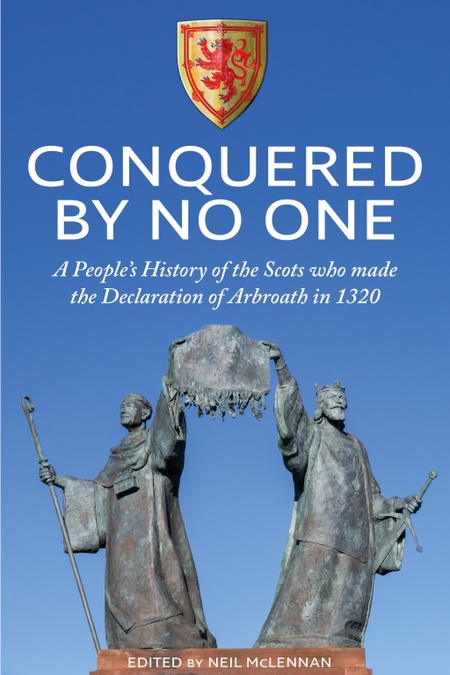 Celebrations to mark the 700th anniversary of The Declaration of Arbroath might be on hold but a new book exploring the untold stories of the Scots behind the document continues at pace despite current restrictions.

A team of more than 50 writers are collaborating to bring to life a ‘people’s history’ of the Barons and nobles who sealed the 1320 letter intended to confirm Scotland’s status as an independent sovereign state.

The book, Conquered by No One, is being written along the historic timeline of The Declaration, which is widely thought to have been drawn up in Arbroath Abbey.

Edited and coordinated by Neil McLennan, a former history teacher and now Director of Leadership Programmes at the University of Aberdeen, it will include chapters of each of the 39 names in the letter and others associated with it. Some chapters have been written by their direct descendants.

It will also include a fresh translation of The Declaration and Pope John XXII’s response by Dr Roger Collins of the University of Edinburgh and Dr Marie-Luise Ehrenschwendtner of the University of Aberdeen which will help reconsider the meaning of key aspects of these documents.

Mr McLennan said: “On this day 700 years ago the document was drawn up so it is a fitting date by which to have drafts for each of our chapters. In late April or May The Declaration of Arbroath was sent to the Pope and he responded on August 28 so we are following this historic timeline for publication.

“The project was audacious at best when we first started with fifty people from across the country - ranging from historians and writers to teachers and civic figures - contributing to a single text.

“The current restrictions on freedom of movement have caused some difficulties but today (April 6) we have chapters and biographers for each noble and Baron whose name appears in the historic Declaration of Arbroath.  It has been a truly cooperative effort and we thank each of them for bringing history alive.

“Readers will be fascinated with the stories of the people behind the treaty, never before shared in this way, and moreover the local stories which impact on each area of Scotland.”

Contributors include Lord Charles Bruce -  one of the most prominent living descendants of Robert the Bruce – who has written a chapter on his forefather; and Anthony Maxwell who has direct lineage to Eustace Maxwell; David Leslie, Baron Baillie of  Balquhain and Restorer of Leslie Castle 1979-89,  who offers insights into Andrew De Leslie and authors working with the current Earl of Dalhousie, descendant of William Ramsay.

Academics from across Scottish life and disciplines have also penned episodes with Professor Barbara Crawford, Past President of the Society of Antiquaries of Scotland, detailing Magnus, Earl of Orkney and Professor Murray Pittock, Vice Principal of the University of Glasgow, writing on William Oliphant, Lord of Aberdalgie and Dupplin.  Medieval historian Dr Fiona Watson has also supported the production of this new work.

History educators and teachers from across Scotland, including Arbroath High teacher Manu Rio, also offer their perspectives together with Arbroath born Advocate Paul Reid writing on Bernard, Abbot of Arbroath.

The historian Roger Collins, noted for his Keepers of the Keys of Heaven: A History of the Papacy also provides an evaluation of the role of Pope John XXII.

Mr McLennan said that bringing together so many writers from different backgrounds gives the book a unique perspective.

“Just as the 1320 document brought together noblemen with differing views from very different parts of Scotland, we wanted Conquered by No One to represent a broad range of voices across Scottish life.

“The book is very much a people’s history bringing together for the first time the stories, motivations and viewpoints of those who collaborated to sign the Declaration of Arbroath – written by a wide range of enthusiastic teachers, historians, writers, civic figures from across Scottish cultural, education and civic life.”

2)     Conquered by No One front cover, photograph by Andy Hall, design Harold Raitt.