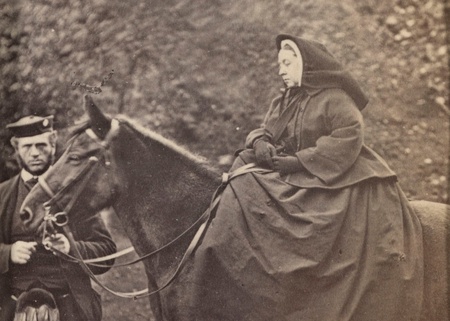 An exhibition of rarely seen photographs of Queen Victoria and the royal family at Balmoral will go on show at the University of Aberdeen from Sunday (March 8).

Lent by Her Majesty the Queen from the Royal Collection, the exhibition will comprise 50 items including photographs, stereoscopic images and albums and will explore Queen Victoria's time in Scotland, including the building of Balmoral, royal engagements and royal portraits.

A reception will be held this Friday, with invited guests from the Royal Collection Trust, alumni and donors, as well as members of the Strachan family. In 1953, AJB (Archie) Strachan donated 40,000 George Washington Wilson glass plates and negatives to the University.

George Washington Wilson (1823-1893) was born in the North East of Scotland and went to Edinburgh and then London in the 1840s to train as a portrait miniaturist.

He became established in Aberdeen in the 1850s as an artist and photographer, and quickly made a name for himself among the middle classes and landed gentry. His patronage by the royal family during their visits to the Balmoral Estates began in 1854, when he was invited to photograph the construction of Balmoral Castle. A year later, in 1855, he was commissioned to take portraits of the royal family within the grounds of Balmoral. He continued to photograph members of the royal family throughout his career and was appointed ‘Photographer to Her Majesty in Scotland’ in 1873.

The University’s George Washington Wilson & Co photographic collection consists of over 37,000 glass plate negatives - the world’s largest collection of his work. In 2011, the University launched a new online system of high-resolution digital versions of images taken between 1853 and 1908 by the firm.

“These photos were taken by royal appointment, focusing particularly on the royal family at Balmoral and is a chance to see some rarely seen images from the family photograph album.”

The display will be held in the University’s Sir Duncan Rice Library Gallery until July 5, when the Royal Collection items will move on to the Palace of Holyroodhouse in Edinburgh from July 17 to October 4, 2020.

The Royal Collection is among the largest and most important art collections in the world, and one of the last great European royal collections to remain intact. It comprises almost all aspects of the fine and decorative arts and is spread among some 15 royal residences and former residences across the UK, most of which are regularly open to the public. The Royal Collection is held in trust by the Sovereign for her successors and the nation and is not owned by The Queen as a private individual. At The Queen’s Galleries in London and Edinburgh, aspects of the Collection are displayed in a programme of temporary exhibitions. Many works from the Collection are on long-term loan to institutions throughout the UK, and short-term loans are frequently made to exhibitions around the world as part of a commitment to public access and to show the Collection in new contexts. Explore the Royal Collection at www.rct.uk/collection