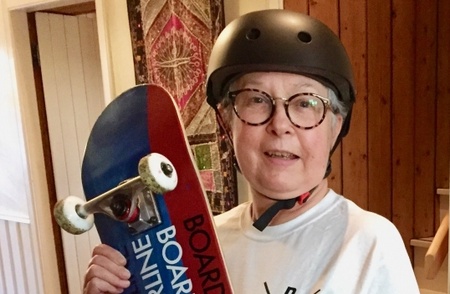 An Aberdeen cancer patient has committed to a unique challenge to raise vital funds for research and to send out a message to the disease that she is fighting back.

Elaine Shallcross, 68, has pledged to perform a tough skateboarding move called a ‘shove it’ (or shuvit) despite never having stood on a board before and her endeavour has already seen people pledge £8,000 to support her.

The former University of Aberdeen library worker will need to learn to make the board spin 180 degrees under her feet without the board hitting the floor – all while undergoing gruelling chemotherapy to fight a recurrence of cancer.

Elaine, from Ellon, was first diagnosed with breast cancer in August 2018 and after intensive treatment which included chemotherapy, surgery and radiotherapy was given the all clear.

But a routine check-up only months later revealed that the cancer had returned and was in her lymph nodes. She is now undergoing treatment and although the disease has not spread, she is waiting to find out if it curable.

Elaine admits the original diagnosis came as a real shock but once the news had sunk in, she knew she had to do something to fight back.

Following her initial diagnosis, she embarked on a fundraising campaign to support the work of the University’s Professor of Oncology Valerie Speirs who is pioneering research into the causes and treatment of breast cancer in both women and men.

Elaine said: “Not long after my diagnosis in 2018 I attended a Development Trust fundraising event at the University where I heard Professor Speirs speak. I was so impressed that this wonderful research was on going right here in Aberdeen at the University and I learned about the plans for a new £4.5million cancer research campaign to support patients.

“My daughter Jenny came up with the idea of making beanie hats inspired by those worn at the Winter Olympics to sell in aid of Prof Speirs research.

“They proved amazingly popular and we raised more than £5,000 for the University’s Development Trust but, after taking part in the Aberdeen Kiltwalk, I wanted a fundraiser that was challenging and different from most.

“That’s when my son-in-law Steven Davidson – a passionate skateboarder – came up with the brilliant idea of combining a skateboarding trick with a hard hitting message to cancer.

“He told me about a move called a ‘shove it’ or ‘shuv it’ and created the ‘Shuvit Cancer’ campaign. It just worked so well – it’s exactly what most people want to say to this horrible disease and it provided a real test for me.

“But it means that I’ve got to learn to skate and this is not a sport I thought I’d ever be taking part in!

“You see it online and think ‘I could do that’ but when you start practising it soon becomes clear just how difficult it is. In fact it isn’t easy to stay on a board at all!”

Elaine, who says the chemo is currently hitting her ‘pretty hard’, is building up to the challenge with practice in her front room with a board without wheels so she can master the motion of spinning the board beneath her feet.

She will then move onto using skater trainers which lock the wheels to allow her to practice the trick without the board rolling away.

“I must be a fairly amusing sight in my living room with my board on a bathmat and wearing a crash helmet but I have to start somewhere and I’m told this is the best way to build up muscle memory and prepare for the trick until I have a little more energy.” added Elaine. “And there’s less chance of falling off!

“I’ve had such wonderful backing in a sport I never imagined I’d be taking part in. The Boarderline Store in Banchory donated me a board, ultra elite skateboarders including the Berrics, Tony Hawk, and Daewon Song have recorded shuvits and shared my campaign, and Girl Skates UK and Prom Queen skateboarding groups amongst many others have been a real support. Equally as important are all the thousands of individuals who follow me on Instagram, share my campaign, organise fundraisers, record shuvits and send donations and messages of support and advice.

“I’ve been getting tips and shuvit videos from adults nearly my age to seven year olds - who have also donated their pocket money - and to know that people are behind me in this way is incredible.

“I’ve been really moved by the way the skateboarding community has taken to this. They are really passionate about what they do and have been the most welcoming and supportive group of people you could ever wish to meet.

“No one has said ‘you’re making a fool of yourself what are you doing’! Instead they’ve all said this is amazing and are trying to help me in any way they can.

“They have shared the @shuvitcancer Instagram page we created across the community. In just two weeks we’ve gained more than 47,000 new Instagram followers and the fundraising total on JustGiving, which includes previous campaigns, is now £14,000.”

Rob Donelson, Executive Director of Advancement at the University’s Development Trust, said: "Not only has Elaine raised an incredible amount of money, but she has also increased awareness of the cause she clearly cares so dearly about. She has also done this in a fun and colourful way, inspiring thousands of people to support and follow her. It is testament to her generosity and dedication that she is so successful.

“On behalf of myself and all my colleagues at the University of Aberdeen I’d like to say a massive thank you to Elaine as well as everyone who is supporting her and wish her the very best of luck for performing her ‘Shuvit’ skateboard trick on her birthday on 10th July.”