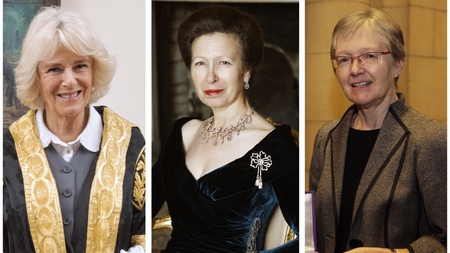 The Duchess of Rothesay is Chancellor of the University, and will preside over the ceremony, which will also recognise a world-leading clinical trials scientist, as well as a charity which encourages young people into sport, the arts and culture, while helping to tackle anti-social behaviour.

Professor Janet Darbyshire CBE will receive her honorary degree in recognition of and for the significant impacts she has made in clinical sciences for over 40 years. Previously Director of the Medical Research Council Clinical Trials Unit, Professor Darbyshire’s study of diseases such as HIV and tuberculosis, has led to improvements in prevention and treatment across the world.

A special Principal’s Award for Outstanding Service to the Community will also be presented to the Denis Law Legacy Trust – which provides through their Streetsport initiative, free outreach projects to children and young people in the local area and has made huge strides in reducing youth crime and anti-social behaviour. Aberdeen-born former footballer Denis Law CBE will be among Trust representatives in attendance.

The University of Aberdeen's foundational purpose dedicates this institution to acting 'in the service of others'. Honorary degrees and special awards are our way of acknowledging people who have made exceptional contributions to the service of others, and I am delighted we are recognising The Princess Royal, Professor Janet Darbyshire and the Denis Law Legacy Trust in this way." Professor George Boyne

The Princess Royal – who started undertaking public engagements at the age of 18 – was nominated by the University for an honorary degree in recognition of her extensive charity work.  Save the Children was the first major charity Her Royal Highness was associated with, and after 46 years as President, today remains its Patron. The Princess Royal is involved with another 300 charities, organisations and military regiments in the UK and overseas, and devotes a large part of Her Royal Highness’ working life to engagements and visits.

“The University of Aberdeen’s foundational purpose dedicates this institution to acting ‘in the service of others’. Honorary degrees and special awards are our way of acknowledging people who have made exceptional contributions to the service of others, and I am delighted we are recognising The Princess Royal, Professor Janet Darbyshire and the Denis Law Legacy Trust in this way.”

HRH The Princess Royal - Degree of Doctor of Laws (LLD)

Her Royal Highness The Princess Royal has a busy schedule of engagements which see her travel widely across the UK and overseas. Known for her love of horses and an equestrian career which saw her compete in the 1976 Montreal Olympic Games, Her Royal Highness is involved with the Riding for the Disabled Association across the Commonwealth. Much of Her Royal Highness’s time is also spent supporting the work of Save the Children.

The Princess Royal started undertaking public engagements at the age of 18, when her first engagement was the opening of an educational and training centre in Shropshire in 1969. Since then, Her Royal Highness has established significant and ongoing relationships with a number of charities and organisations across the UK and Commonwealth and has one of the busiest working schedules of any Member of the Royal Family.

The first major charity with which Her Royal Highness became associated was Save the Children in 1970. That association continues today as The Princess Royal now serves as its Patron after serving for 46 years as the charity’s President, and therefore has great insight into the needs of children worldwide and an understanding of the issues affecting developing countries. In Her Royal Highness’ work for the organisation The Princess Royal has visited Save the Children projects in many countries, including China, Cambodia, Botswana, Madagascar and the Philippines.

The Princess Royal is involved with over 300 charities, organisations and military regiments in the UK and overseas, and Her Royal Highness devotes a large part of her working life to official engagements and visits.

The Princess Royal has been closely involved with the creation of several charities, notably The Princess Royal’s Trust for Carers (now Carers Trust), Transaid and Riders for Health. The Carers Trust provides support for the millions of individuals in the UK who are responsible for caring for someone.

Transaid and Riders for Health both try to overcome some of the difficulties caused by poor transportation links in developing countries.

Professor Janet Darbyshire has made significant impacts in clinical sciences for over 40 years.

Her work has had a major impact on World Health starting with her involvement and design of clinical trials in the epidemiology, effect of treatment and prophylaxis in tuberculosis.

She refined the use of the clinical trial as a vital research tool and applied her experience in TB to tackle the terrible consequences of the HIV epidemic in Africa.

Her pre-eminence in her chosen field is attested by her past membership of just about every committee, advisory board or steering group relevant to the organisation and effectiveness of clinical trials in AIDS, HIV or TB, many of which she contributes to as Chair or Secretary quite apart from her scientific expertise.

She was awarded an OBE in 1996 and a CBE in 2010 for services to clinical sciences. She was also awarded the MRC Millennium Medal in January 2018, which is awarded on a two-yearly basis to an outstanding scientist who has made a major contribution towards the MRC’s mission to improve human health through world class medical research.

Professor Darbyshire is the first ever female recipient of the award. Her work has had a truly global impact and her research has been vitally important to the UK scientific community. Her knowledge and expertise in clinical trials has ensured that we develop safe and effective medicines, saving millions of lives and preventing disease in the UK and across the world.

The Denis Law Legacy Trust supports and empowers young people to be confident, capable, independent and responsible citizens within their own communities through sport, the arts, and culture.

It provides a range of ‘free to access’ outreach projects to children and young people living in and around the Aberdeen area helping those most in need to gain access to sport and other creative activities.

Denis Law was born and raised in Aberdeen and went on to become the only Scottish football player to win the prestigious FIFA Ballon d’Or European Footballer of the Year in 1964. He played for Huddersfield Town, Manchester City, Torino and Manchester United. The eleven years Law spent playing for Manchester United saw him score 237 goals in 404 appearances.

The work of the Denis Law Legacy Trust has made major strides in reducing instances of youth crime and anti-social behaviour, promoting health and wellbeing and encouraging inclusivity through sport, physical activity and creative endeavour.

The activities run by the Denis Law Legacy Trust currently engage over 16,000 participations annually across a range of age groups and include a wide variety of opportunities that help contribute to healthier and safer local communities.