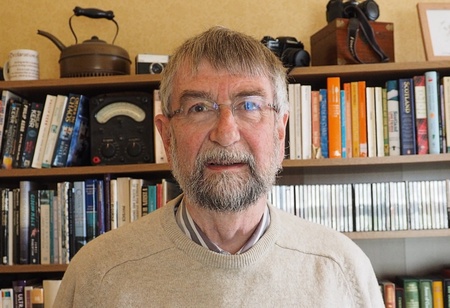 A leading engineering professor from the University of Aberdeen has been named as a Fellow of the IEEE, The world's largest technical professional organisation for the advancement of technology.

Professor John Watson received the accolade in recognition of his work contributing to the development of submersible holography – so-called ‘holocameras’ - to record high-resolution 3D images of marine particles and organisms.

The method is used by marine scientists to monitor the abundance and behaviour of plankton, providing insights into the health of the marine environment and the impact of global warming.

Commenting on his elevation as a Fellow of the IEEE, Professor Watson said: “I am delighted and honoured to be elected to the Fellowship of the IEEE and welcome the recognition and value of my work in holography and the development of holocameras.

“Although such accolades are made to individuals, we should recognise that such awards are only achievable through the hard work and dedication of many research students and colleagues thorough the years. Without them, and the support of my wife and family, this achievement would not have been possible.”

Since moving to Aberdeen University in the 1980s, Professor Watson’s professional career has been dominated by research in optical engineering, and in particular on subsea applications of lasers and optical technology.  He established a laser/optics research group which acquired an international reputation for its work in underwater holography and the development of subsea holographic cameras.  These holocameras have been deployed from the west coast of Scotland to the Okinawa Trench, off the coast of Japan.  As well as research and teaching activities he has been active in the Oceanic Engineering Society (a constituent Society of IEEE) from 2002 and earlier this year was elected to Vice-President with responsibility for all OES/MTS OCEANS conferences.

Professor Watson graduated with a PhD from the University of St Andrews in the late 1970s. After five years with the UK Atomic Energy Authority in Caithness, he moved into the academic world at RGIT (as it was) in Aberdeen and then to Aberdeen University until his retiral in 2016.  Professor Watson is a Fellow of the Institution of Engineering Technology (FIET) and of the Institute of Physics (FInstP) and a Chartered Engineer (CEng).

The IEEE Grade of Fellow is conferred by the IEEE Board of Directors upon a person with an outstanding record of accomplishments in any of the IEEE fields of interest. The total number selected in any one year cannot exceed one-tenth of one- percent of the total voting membership. IEEE Fellow is the highest grade of membership and is recognized by the technical community as a prestigious honour and an important career achievement.

The IEEE is the world’s leading professional association for advancing technology for humanity. Through its 400,000 plus members in 160 countries, the association is a leading authority on a wide variety of areas ranging from aerospace systems, computers and telecommunications to biomedical engineering, electric power, optics and consumer electronics.

Dedicated to the advancement of technology, the IEEE publishes 30 percent of the world’s literature in the electrical and electronics engineering and computer science fields and has developed more than 1300 active industry standards.  The association also sponsors or co-sponsors nearly 1700 international technical conferences each year.  If you would like to learn more about IEEE or the IEEE Fellow Program, please visit www.ieee.org