Walking with Birds: The Art of Audubon and MacGillivray
12 September 2019 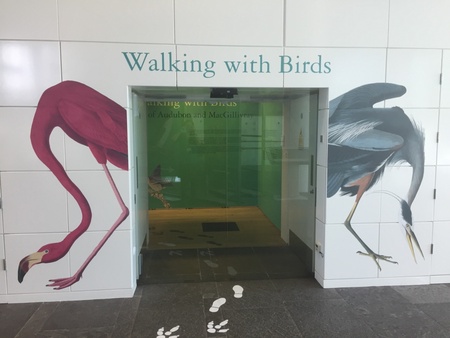 A major exhibition in the University of Aberdeen's Sir Duncan Rice Library explores the friendship of nineteenth century Aberdeen professor William MacGillivray with renowned American artist and naturalist John James Audubon, and the extraordinary book that they created together.

On display is a star item from the University of Aberdeen’s special collections: a volume of Audubon’s famous Birds of America (1827-1838), a giant book measuring over a metre high.

It is filled with breath-taking depictions of every species of bird that Audubon encountered during his extensive journeys in the North American continent. Audubon’s images were not just factually accurate, but dramatic artworks capturing scenes such as owls bursting into flight, songbirds perching delicately in the trees, and eagles feasting on their prey.

Visitors will also see highlights of the University’s zoological and botanical collections, including a rare Great Auk egg from a now extinct species, and specimens collected by Audubon himself.

William MacGillivray (1796-1852) played a key role in creating Birds of America. Born in Old Aberdeen, MacGillivray eventually became a Professor of Natural History at Marischal College. MacGillivray met Audubon in Edinburgh in 1830, and was hired to edit the companion text for the illustrations of Birds of America, based on Audubon’s field notes. This was an arrangement that developed into a deep and lasting friendship. Audubon named a bird - the MacGillivray’s Warbler - after his friend, and sent him gifts of bird specimens from America.

An adventurous lover of the outdoors who believed in studying nature ‘in the field’, MacGillivray had a poor opinion of the ‘cabinet naturalist’ who never left his study. While a student at the University of Aberdeen, he would walk from his home on the Isle of Harris to university, making notes on the birds, flora and fauna he found along the way. In 1819, aged 23, he walked 828 miles on foot from Aberdeen to London to visit the British Museum and see its natural history collections. This later inspired him to establish the University’s Zoology Museum.

The exhibition opened on the 200th anniversary of the start of MacGillivray’s walk from Old Aberdeen to London. Handwritten journals and notes from this expedition are on display, and quotes from his entertaining diaries trace the course of his journey and show what he did on this day 200 years ago.

Curator Dr Jenny Downes said “It is enormously exciting to follow in MacGillivray’s footsteps, and to appreciate a son of Old Aberdeen’s remarkable contribution to the natural sciences. Visitors will be able to explore Audubon and MacGillivray’s adventurous lives, and marvel at the stunning life-size illustrations of Birds of America”.

There will be a programme of associated events and talks, including creative drawing and writing workshops. For further information see www.abdn.ac.uk/museums