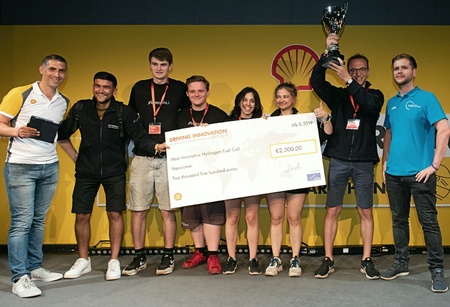 A team of students from the University claimed a major award at this year's Shell Eco-marathon, which took place in London at the weekend.

Team PrototAU saw off competition from teams from around the world to win the best newcomer award for their hydrogen prototype electric vehicle, which they designed and built at the School of Engineering.

As winners of the category the team have taken home £2,500 in prize money to help with the future design of their vehicle.

The Shell Eco-marathon allows students to test energy-efficient cars, before taking their designs to the track to see which vehicle can go furthest on the least amount of fuel.

The 40-strong PrototAU team, which consists of engineering and business students, built their car using a fuel cell donated by Ballard, a Canadian company specialising in the development of fuel cell technologies.

Alessandro Rigola, team captain of PrototAU, said: “Setting up a team to compete at the Shell Eco Marathon was one of the most difficult but most rewarding projects I’ve ever done.

“The students managed to design a car focusing in particular in designing the fuel cell controller which has won an award for its innovative approach.

The success of the PrototAU team is a great example of how the School's promotion of renewable energy sources in our teaching and research activities is achieving real results." Professor Igor Guz, Head of the School of Engineering

“After a lot of struggles and setbacks, the team grew stronger and today I am proud to say that after our success in London, I leave the team to great students who I am sure will be able make Aberdeen University shine even more.”

Dr Alf Felipe-Martinez, from the School of Engineering, is Team PrototAU’s project supervisor.

“They set up devices to investigate more efficient materials and processes in fuel cells, and to optimise structural design in order to minimise power consumption in the car.

“Research in hydrogen technologies will be paramount to carry out decarbonisation worldwide, and PrototAU’s success demonstrates that our School and University are fully committed and prepared to play an important role to complete the transition to renewable energies in Aberdeen”.

Igor Guz, Head of the School of Engineering, added: “The success of the PrototAU team is a great example of how the School’s promotion of renewable energy sources in our teaching and research activities is achieving real results.

“The School has long enjoyed success on the track through the TAU Racing Formula Student team, however our decision to invest in a new, eco-friendly hydrogen racing team has paid dividends thanks to the efforts of our students, staff and sponsors.  I’d like to congratulate all of those involved for a job well done.”

A short video produced by PrototAU, explaining the science behind their use of fuel cell technology, can be viewed here