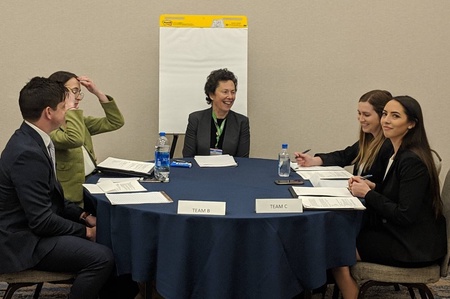 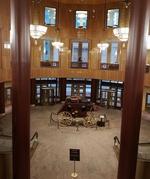 The 11th April was the first day of the full conference – Shining the light on the parties in Dispute Resolution. It started with a Keynote conversation entitled  “No Risk, No Reward - How Creativity, Resourcefulness and Confidence Can Change the Face of Resolving Disputes” including the Senior Vice President of Bayer Pharmaceutical in the USA (previously Monsanto) and a Federal District Judge who is dealing with 1700 cases by cities and councils against opioid manufacturers. The SVP is a lawyer who acted for Monsanto then became their in-house lawyer. He spoke of finding Monsanto in a litigation war with Dupont over certain agricultural pharma products. Monsanto won a $1bn lawsuit and Dupont went into fightback mode in multiple cases against Monsanto. He decided to suggest a radical change of approach in which they would aim to settle all of the cases and avoid litigation in the future. He discussed with his counterpart at Dupont and they sought CEO approval in both companies. They had a team of experts in law and tax sit down to negotiate and it took 16 days but they settled all cases, and Monsanto did not insist on recovery of their $1bn from Dupont. He then set up a strategic approach within the company to avoid litigation by always going through structures of negotiation, mediation and arbitration. Across the whole company in the USA they encouraged their lawyers to settle all cases. They also meet quarterly with Dupont to flush out any simmering disputes. The motivation? This approach freed money for Monsanto and their opponents to spend on their real business which is devising better pharma for agriculture leading to better food security. He reminded us that taking a strategic business view of the situation would rarely favour spending time and money in litigation. A presenter who uses visualisation to set out the nature of a dispute and the interests of the parties produced the attached sketch, which also reflected input from the judge on how poorly suited courts are to dealing with cases that reflect societal problems like access to drugs.

Using the lenses of psychology and business alongside law was considered in a session about constructing opportunities for settlement in mediations. We heard about the setting up of state endorsed mediation services in Croatia, Vietnam, India, Brazil and Rwanda where high level support (from senior judiciary in particular) was essential, but design of the systems had to respect existing norms of dispute settlement in each country. A senator from Minneapolis shared the work done to enhance disclosure and settlement of disputes in the very diverse immigrant population in the state of Minnesota some of whom are well-paid economic migrants and others lower income refugees. She stated that one had to have a “fierce heart” to use mediation in the face of so many cultural differences which had to be respected; a good reminder that mediation is not an easy option albeit often the most constructive one.  By use of listening and collaborative processes it was possible to persuade the tribal elders in the city to push for legislation against gender-based violence after initial intense resistance to a suggestion of such legislation by the Asian community. Inclusion and diversity was a major feature of today’s activity at the conference.

The students’ representation in mediation competition reached its final today and the winning team out of 70 regional participants were the team on the left of the photo (Team B).

The skywalks around the city centre allowed Margaret to walk to and from the conference without stepping into the snow covered streets, but meant she passed through the Wells Fargo bank building, complete with a Stagecoach.