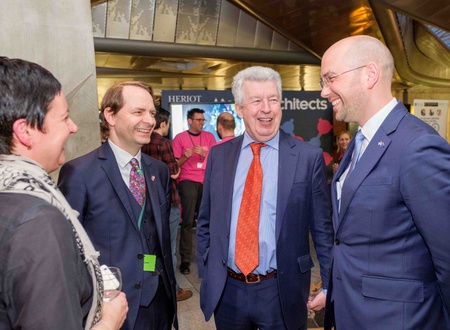 Researchers from the University of Aberdeen met with the Minister for Europe at a special Scottish Parliament event to celebrate European research within Scotland.

Professor David Lurie and his team showcased the latest work around the next generation of MRI scanners they are developing, known as Fast Field Cycling MRI on Thursday (March 7).

Professor Lurie’s team is leading a nine-strong consortium of research groups from six different countries, in a project called IDentIFY. The project received a €6.6 million Horizon 2020 research grant from the EU to develop the imaging technology and bring it closer to widespread use in hospitals.

The team joined a number of other Scottish universities at the Holyrood event to highlight the best of European-funded research.

The evening was sponsored by North East MSP Lewis MacDonald and organised via Explorathon (known as European Researchers Night across the continent) - a public event dedicated to research and fun learning that takes place every September across Europe. Around 30 countries and over 300 cities are involved. It is funded by the European Commission under the Horizon 2020 programme. The University of Aberdeen leads the programme.

This event highlights the importance of research and inclusivity of research to the public and at a time where we want to be encouraging as much innovation and participation in academia and in the economy more widely." Minister for Europe, Ben Macpherson MSP

Ben Macpherson, Minister for Europe, Migration and International Development, addressing the group, said: “Looking at the project about the future MRI development and technology, to see the collaboration of the list of countries involved, let alone the list of people, was quite remarkable and tells a story that I know all the stalls will tell as well and the whole spirit of this celebration embodies.

“This event highlights the importance of research and inclusivity of research to the public and at a time where we want to be encouraging as much innovation and participation in academia and in the economy more widely, for an event to do that on such a wide scale is definitely worth celebrating again as we are this evening.”

Senior Vice-Principal of the University of Aberdeen, Professor Karl Leydecker, said: “This event is a fantastic opportunity to celebrate and see first-hand the research that the European Commission funds in Scotland as well as to mark the success of Explorathon.

“The range of innovative, exciting and important projects on display tonight is testament to the importance of European-funded research and the collaboration it brings. Explorathon takes that research and finds new ways to make it accessible and relevant to people in public places with high levels of footfall. Only through the strong links between our core universities and the dedication of all staff involved is this possible.”