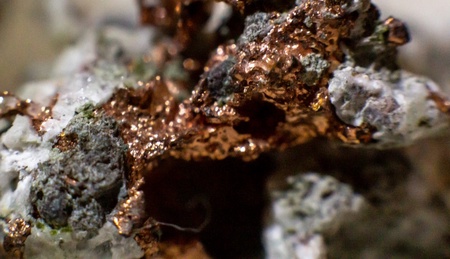 An abundance of copper played an equally crucial role to oxygen in helping the rise and spread of the earliest animals 700 million years ago.

Scientists have analysed geological records to prove that the level of copper in the environment increased dramatically at the same time as the first animals started to emerge.

Copper is an essential building block of life, creating proteins that were crucial in helping early animal life - such as jellyfish and sea sponges - develop respiratory systems.

The relatively low level of oxygen in the environment during the Neoproterozoic period - when the first multicellular life began to emerge - has led scientists to investigate other factors that might have been involved.

By discovering a dramatic increase in the availability of copper during this period, geologists from the Universities of Aberdeen and Glasgow have revealed the crucial role it played in helping early life thrive.

Professor John Parnell, from the University of Aberdeen’s School of Geosciences, led the study, published today in Scientific Reports.

Oxygen was actually toxic to earlier primitive life, but copper gave animals the means to cope with it and use it to their advantage - it was a clever bit of evolution." Professor John Parnell

He said: “Our research shows that across the planet, magmas from deep in the Earth brought copper-bearing volcanic rocks to the surface about 800 million years ago.

“These rocks were weathered to release abundant copper into the environment, just as animals were starting to appear.

“Animals use copper in several ways, but two critical functions of the metal give animals the strength to support themselves, and the ability to breathe oxygen from the air by making compounds called copper proteins, which are essential to the way they live.

“Oxygen in the air had the double role of weathering rocks to provide copper, and of letting animals breathe, which they could do using their copper proteins. Oxygen was actually toxic to earlier primitive life, but copper gave animals the means to cope with it and use it to their advantage - it was a clever bit of evolution.”

Fellow author Professor Adrian Boyce of the University of Glasgow added: “It’s no coincidence that some of the biggest copper ore deposits in the world, in Africa, formed just as the first animals were starting to emerge. Life and rocks were in harmony.”

The study - Neoproterozoic copper cycling, and the rise of metazoans – can be found here www.nature.com/articles/s41598-019-40484-y