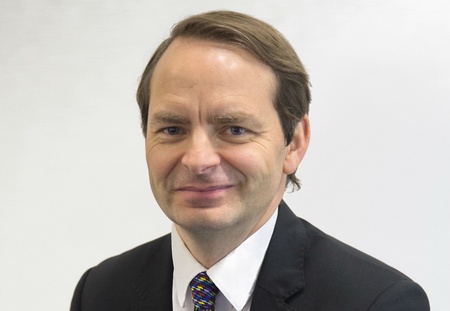 Professor Karl Leydecker is among four University of Aberdeen academics elected to Scotland's prestigious learned organisation, The Royal Society of Edinburgh (RSE), on his very first day as Senior Vice-Principal.

Professor Leydecker joins the University today (March 1) from the University of Dundee where he has been Vice-Principal (Learning & Teaching) of the University since 2013, responsible for all aspects of learning, teaching and the wider student experience. He is also Professor of German and Comparative Literature.

He is one of 62 new fellows of the Royal Society of Edinburgh alongside the University of Aberdeen’s Professor Tom Greggs, Professor Steve Redpath and Professor Jan Skakle.

Professor Leydecker said: “I am delighted to have been elected a Fellow of the RSE in recognition of my track record of educational leadership, particularly on a day when I start an important new role as Senior Vice-Principal.

“While a great personal honour, it is also recognition of the progress made at my former institution, the University of Dundee, in learning, teaching, student experience, employability and widening access over the past five years, and I will strive to have an equally positive impact at the University of Aberdeen.”

Potential fellows of the Royal Society of Edinburgh are nominated in recognition of outstanding contributions to their field and achievement in public service.

New Fellows are then elected through a rigorous five-stage nomination process. They are drawn from across sectors that range from the arts, business, science and technology and academia to join the current Fellowship whose varied expertise supports the advancement of learning and useful knowledge in Scottish public life.

Professor Greggs holds the Marischal Chair of Divinity - the oldest separated Divinity chair established in 1616 - at the University, and is a founding co-director of the Aberdeen Centre for Protestant Theology. He also currently serves as Head of Divinity at Aberdeen. Tom is the former Secretary of Society for the Study of Theology; and has served as co-chair of the Scriptural Reasoning Panel at the American Academy of Religion.

He said: “It is an almost immeasurable honour to be elected to Scotland’s national academy of science and letters, and to have my research, impact and professional standing acknowledged in this way by our nation’s most able and significant academics and public servants. I am deeply humbled by this.”

Professor Redpath is Chair in Conversation Science at the University. His ecological research has focused on understanding the impact of trophic interactions on animal populations. His current research lies at the interface between natural science, social science, policy and stakeholders to analyse and help develop solutions to conflicts around conservation.

He added: “It is a great honour to be elected to the Fellowship of the Royal Society of Edinburgh. I am delighted to have been recognised in this way.”

Professor Jan Skakle is a solid state scientist and is a Fellow of both the Institute of Physics and Royal Society of Chemistry. Her research focus is on structure/property relationships in oxide materials and in general the application of crystallography and diffraction methods to materials problems, with more than 200 papers published. She has worked at the University of Aberdeen since 1994 and served as Head of the School of Natural and Computing Sciences from 2012-2018. She was also a founding inventor of the University spin-out synthetic bone-graft company Sirakoss and currently is leading Creative Outreach and Equality and Diversity issues within the School, areas in which she has a particular passion.

She said: “As someone born, bred and educated in Scotland, I’m delighted to have been elected and join the distinguished ranks of the Fellows of the Royal Society of Edinburgh.  It is a real honour.”

Commenting on the new fellows, President of the RSE, Professor Dame Anne Glover, said, “The calibre of our Fellows never ceases to amaze me and this year is no different. For such a small country we surpass ourselves with the talent and expertise that exists across our academic, cultural and business landscape. All of our Fellows are assets, not just to the RSE but to Scotland and the rest of the world, and I look forward to welcoming and working with them”.

The new Fellows will be inducted in May 2019. More information on the current membership and the work of the RSE can be found at www.rse.org.uk