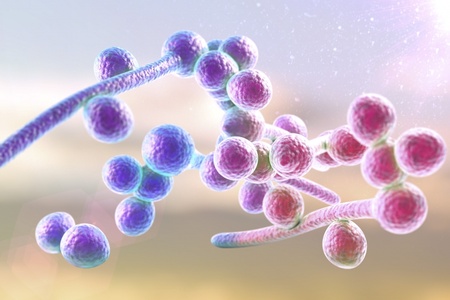 A new way to diagnose, treat and protect against stealth fungal infections that claim more than 1.5 million lives per year worldwide has been moved a step closer, according to research published in Nature Communications.

Despite public health efforts, many people who get fungal infections in their blood streams die, even if they can be identified and treated with antifungal drugs. These therapies are often ineffective on their own and increasingly the infections are becoming resistant to treatment with some of the front line antifungal drugs.

The new technique, within the Medical Research Council Centre for Medical Mycology at the University of Aberdeen and funded by the Wellcome Trust and Medical Research Council, is the first to successfully use antibodies that are cloned from patients who have recovered from an infection caused by the fungus Candida.  In addition to causing thrush in more than one hundred million every year, this fungus is also the fourth leading cause of serious life-threatening bloodstream infections in developed countries. In laboratory experiments, the research team used these cloned antibodies to successfully protect animals from Candida bloodstream infections and demonstrate their potential in both treating and diagnosing Candida infections.

Dr Fiona Rudkin, who led the research and is currently heading up the creation of an Aberdeen-based spinout company to conduct the next phase of therapeutic development, said: “There is an urgent need to develop better ways for diagnosing and treating life-threatening fungal infections.  Human antibodies have revolutionised the way many cancers are treated and diagnosed.  This research marks a huge step towards using similar antibody-based approaches to tackle fungal infections.  These antibodies will now be developed as novel antifungal drugs through the creation of mycoBiologics – a new spin out company based in Aberdeen focused on improving the outcome of patients suffering from life-threatening fungal infections.”

Professor Neil Gow of the University of Exeter, who supervised the research while at Aberdeen, said: “Globally, fungal infections are under-recognised as a major killer. They’re hard to detect and for every day we fail to diagnose a serious fungal infection, the chances of survival diminishes. This research brings us a step closer to a day when we can use the antibodies that are generated by the human body to diagnose and treat fungal infections.”