The University and World War One: Did you know?
08 November 2018 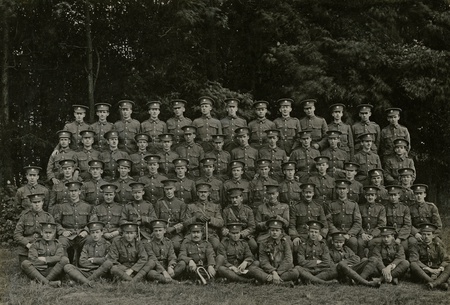 As the world commemorates the centenary of the end of the First World War, we explore 10 University of Aberdeen connections to the 'war that was supposed to end all wars'

An Aberdeen University detachment of the 1st Volunteer Battalion, the Gordon Highlanders, was recruited in 1897 and in 1898 became a University Company (U Company). At the Outbreak of the First World War U-company was mobilised and sent to France; the only University contingent to go. At the beginning of the war the strength of the company was 132 men and this formed approximately one sixth of the Battalion. The majority of the members were from Aberdeen and the North-East but there were also students from Caithness, the Hebrides and the Lothians. U company experienced a terrible loss on the 25th September 1915 at Hooge, during the battle of Loos, when a large proportion of the men from the Unit lost their lives. So heavy were the losses that following the battle U-Company ceased to exist with most of the survivors from the unit either returned to their studies at the University after being declared medically unfit or drafted into other regiments. By 1916 the recruitment of these ‘pals’ battalions ceased as heavy casualties could devastate entire communities.

As the toll of casualties grew during the First World War, the University played its own part in assisting the wounded through the creation of the Aberdeen University War Work Party. It produced thousands of war dressings, garments and hospital comforts and by June 1917 its average weekly output was noted as being 3,400 dressings and 420 garments.

The University’s professor of surgery, Sir Alexander Ogston’s, was 70 years of age when war broke out in 1914. Despite this he was quick to offer his services at the outbreak of hostilities. He took charge of the British Belgrade Auxiliary Hospital in 1915 before being appointed surgeon with the 1st British Ambulance Unit in Italy in September 1916. In between he remained busy as a member of the Central Medical War Committee, the Aberdeen County Branch of the Red Cross, the Aberdeenshire Territorial Association, the City War Work Association and the County War Work Association.

Winston Churchill, then First Lord of the Admiralty, was appointed Rector of the University in November 1914.

The sudden increase in the proportion of female students as men either volunteered or were called up for armed service meant that women soon outnumbered their male counterparts, particularly in the faculty of Arts (by 1917 the student population was almost half that of its pre-war level). Women began to have a more prominent role in student affairs, increasing their representation on the Students Representative Council, and taking over the running of the student magazine Alma Mater.

Students also supported the war effort in various ways: in addition to joining the University War Work Party, many undertook fundraising activities such as selling flags in aid of the Belgian Refugee Fund while others served meals to soldiers at the railway station or worked on farms during the summer vacation.

An important figure, and one who played a pivotal role in steering the University through the war years, was Sir George Adam Smith (1856-1942), Principal from 1909-1935. He was very supportive of U Company and the OTC. Two of his three sons were killed in the First World War, a loss compounded by the fact that he had the solemn duty of reading the names of those killed at the annual chapel service.

The declaration of the Armistice on the 11 November 1918 was met with great celebrations on campus, and a torchlight procession was held that evening.

The names of the 342 University alumni, staff and students who were killed in the Great War are carved into 28 panels in King’s College Chapel. Designed by William Kelly (1861 – 1944), one of Aberdeen’s most distinguished architects, the memorial took 10 years to complete and had its final consecration on Armistice Day 1928. The Chapel is also home to a stained glass window was designed by artist Douglas Strachan (1875 – 1960) and installed after the panels to symbolise ‘man’s spiritual effort against aggression’. A group of modern soldiers are depicted sending out the final “cease fire” bugle call.

The University has an online resource to bring to life the stories of thousands of University of Aberdeen staff and students who served in the First World War. The Roll of Honour is a publically available and searchable database containing the war records of some 2,852 members of the University Community from the Great War.