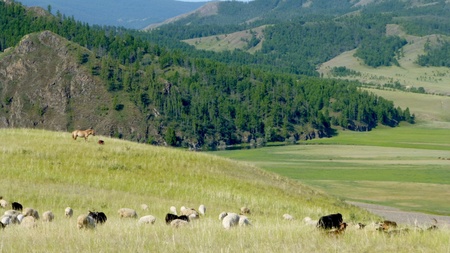 University of Aberdeen archaeologists have contributed to important new research which has found the earliest direct evidence of dairying in the East Asian Steppe - a key economic, political and cultural area with trade routes that predate the famous Silk Road.

Pastoralism based subsistence systems are found throughout the world and remain a key element of the Eurasian steppe today.  This new research anchors that system in prehistory.

A world-wide team of researchers led by the Max Planck Institute for the Science of Human History has identified that populations in Mongolia were already living a pastoralist, dairying lifestyle as early as 1300BC – more than 2500 years before the legendary pastoralist based armies of Genghis Khan were able to build the largest contiguous empire in history from their heartland in northern Mongolia.

The findings, published in the journal PNAS, show that although the livestock that were milked – cattle, sheep and goats – were not native to the region and were likely introduced by Western Steppe herders, the human genetic contribution from the west was minimal.

This points to a society which was able to build its own livestock and dairying technologies from those transferred by cultural processes rather than a major population migration suggesting ‘real creativity, adaptability and dynamics in prehistoric Mongolian society’.

Although pastoralism has long been the primary means of subsistence on the East Asian steppe, the origins of this tradition have been unclear and the findings of the research team have demonstrated clear evidence in a period when pastoral subsistence was only indirectly seen. Researchers analysed human remains from a group of six sites in northern Mongolia associated with the Deer Stone-Khirigsuur Complex (DSKC). The DSKC is the earliest culture associated archaeologically with pastoralism in Mongolia, with sites containing bones of sheep, goat, cattle and horse as early as the 13th century BC.

“The DSKC is well-known for their monumental architecture, including upright stones with deer and other motifs, and large stone mounds, often associated with one or more human burials,” explains co-first author Shevan Wilkin of the Max Planck Institute for the Science of Human History.

The researchers conducted genome-wide analyses on 22 DSKC individuals, whose remains were radiocarbon dated to the late Bronze Age, ca. 1300-900 BC. Whole genome sequencing was further performed on two of these individuals. The results of these analyses showed that these Bronze Age Mongolians were genetically distinct from Western steppe herders of the same time period, indicating that the appearance of dairying in Mongolia was not the result of population migration and replacement.

Dr Joshua Wright from the Department of Archaeology at the University of Aberdeen provided regional archaeological context for the analysis.

“My role might be described as putting the pins in the proper places on the map and timeline” he added.

“Our research breaks the centuries’ long link between population migration and way of life in Eurasian prehistory. It shows us that people in the past adopted and adapted new dietary systems to their local needs. Changes as fundamental as food systems suggest a real creativity, adaptability and dynamics in prehistoric Mongolian society.”