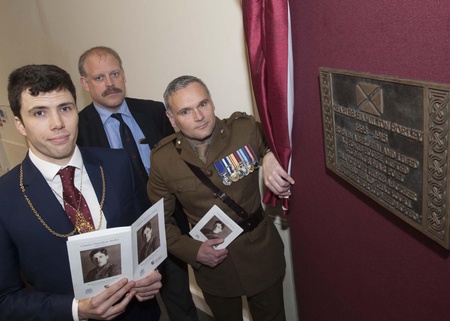 The life and work of Aberdeen's greatest war poet has been commemorated with a plaque on the building in which he grew up.

Aberdeen City Councillor Ryan Houghton, who has seen active duty in Afghanistan when he was in the RAF, unveiled the plaque on behalf of the Lord Provost and the people of Aberdeen on Friday  November 2.

Charles Hamilton Sorley was born on 19 May 1895 in Aberdeen and lived his early years in Powis House, which is now Powis Gateway Community Centre. He was the son of a University of Aberdeen professor, William Ritchey Sorley, who taught moral philosophy.

Sorley was just 20 when he was killed by a German sniper’s bullet during the Battle of Loos in 1915 but when his work was published posthumously a year later, it made a significant impact. He was described by poet, writer and critic Robert Graves as “one of the three poets of importance killed during the war,” alongside Wilfred Owen and Isaac Rosenberg.

Sorley had been studying in Germany at the outbreak of the First World War but following a brief internment returned home and immediately enlisted as a second lieutenant in the Suffolk Regiment. He was sent to the Western Front in May 1915 as a full lieutenant, saw action at Ploegsteert in Flanders, and was promoted to captain that August.

But like many, his life was cut short at The Battle of Loos; an ambitious attack planned by Sir Douglas Haig. Of the nearly 10,000 British soldiers who attacked, 385 officers and 7,861 enlisted men were killed.

Among them was Sorley, who was shot in the head by a German sniper on October 13. His body was never found.

In his soldier’s kit were 37 poems and these were published posthumously. One entitled “When You See Millions of the Mouthless Dead,” contained the powerful lines “…scanning all the overcrowded mass, should you/Perceive one face that you loved heretofore,/It is a spook. None wears the face you knew/Great death has made all this for evermore.”

Neil McLennan from the University of Aberdeen has conducted significant research into Scotland’s war poets and spearheaded the campaign for recognition of the contribution made by Sorley, and other north-east poets, to our literary heritage.

The plaque dedicated to Sorley comes as a result of the efforts of Scotland’s War Poets’ Corner Committee chaired by Mr McLennan.

Charles Hamilton Sorley is Aberdeen's greatest war poet and had strong connections to the University of Aberdeen through his father, who lectured here. Despite this, his work is not widely known in the city" Professor George Boyne

The plaque has been awarded under Historic Environment Scotland’s 2018 round of the Commemorative Plaque Scheme, which celebrates the lives of significant people by erecting memorials on the buildings where they lived or worked.

Neil McLennan said: “The work of Scotland’s War Poets’ Corner Committee has ensured that both the sacrifice and cultural contribution of these talented writers will live on for another hundred years and more. We remember their sacrifice and their warnings of the horror war.”

Councillor Ryan Houghton said: “Aberdeen has been involved in many wonderful commemorative events to mark the Great War over the past four years and the unveiling of a plaque in recognition of Charles Hamilton Sorley is a timely and fitting permanent marker of Remembrance for the city’s greatest war poet.

“Thanks, must go to the Chair of War Poets Corner Committee and the education, arts, civic and business groups brought together to ensure that there is a plaque for Charles Hamilton Sorley.

“The words on the plaque are particularly poignant as they quote Sorley’s own poetic words on Remembrance. By having the plaque within Powis House, which is now the local community centre, we will ensure that the community and particularly young people, will see it and be inspired to take up the torch of Remembrance for the next 100 years.”

Thomas Knowles, Head of Grants at Historic Environment Scotland, said: “The Commemorative Plaque scheme is a fantastic way to recognise someone whose life and achievements have made a difference to Scotland and its people. Charles Hamilton Sorley is one of Scotland’s most revered war poets and we’re delighted to award this plaque as we approach the centenary of Armistice Day.”

“The University has previously paid tribute to his memory with an event at the 2016 May Festival, on the centenary of the posthumous publication of his work, which demonstrated the enthusiasm of the local community for a lasting memorial to his legacy.

“We are delighted that his contribution to our literary heritage can now be recognised with a plaque.”