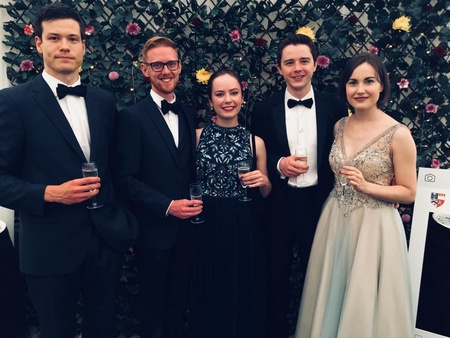 When Roberta Garau told her friends that she was swapping life on the sunny island of Sardinia in the middle of the Mediterranean for the changeable (and that's being generous) climate of the North East of Scotland, her friends thought she was crazy.

On her first trip to Scotland to interview for a place at the University of Aberdeen’s medical school, she started to think her friends might have a point when the ‘Russians’ she was sitting next to on the train turned out to be locals speaking English with such a heavy accent she had wrongly assumed they were tourists from Eastern Europe.

Thankfully, she found the accents of her interviewers at the University far more decipherable and after being accepted went on to ‘fall in love’ with the region and finish top of her class in the process.

“My friends were all going to London and they thought I was crazy for wanting to go to the ‘middle of nowhere’ but I have not regretted it at all,” she said. "Aberdeen was one of my choices as it is a well-respected medical school."

“The people here are so kind. Everyone is friendly and it feels like Italy or other parts of Europe. I was really able to connect with the community and feel part of it.

“I got a car last year and have been able to explore Aberdeenshire which is truly stunning. I was in Inverness and travelled to explore the west coast of the Highlands and also the Orkney Islands. The countryside is stunning and it was great to have the opportunity to do placements in some of the prettiest places in the UK.”

In addition to placements in the UK, Roberta was able to enjoy opportunities abroad.

“What I really liked about my time at Aberdeen were the great summer research opportunities. I've discovered my passion for research and I've explored Brazil thanks to a MRC Mycology scholarship.”

However, Roberta’s stay in Aberdeen was marred by tragedy, after her mother was diagnosed with cancer and passed away during her Third Year.

The people here are so kind. Everyone is friendly and it feels like Italy or other parts of Europe. I was really able to connect with the community and feel part of it." Roberta Garau

“It was very hard at times. When you are young you don't think that anything bad can happen to your close family. Unfortunately, my mother was really ill for some time and it was really hard to be away from her. I decided to keep going as I didn't want to join a year where I did not know anyone who could support me.

“I have had a few terrible years but I had great support from my friends. They cooked for me, passed me their notes and tolerated me when I was tired and grumpy. I have discovered the value of true friendship. They are the reason why I am graduating this year and I will be forever grateful to them for their help.”

Despite this, Roberta completed her studies and will receive the medical school’s Medal for Excellence for finishing as her year’s most distinguished student. In addition, she was also awarded the James Matthews Duncan Medal in Obstetrics.

“I was really surprised when I discovered I had finished top of the class. I knew I had good grades but I didn't realise they were that good! I thought there was a mythical creature that managed to get top marks all the time.

“I come from a lovely sunny place. However, it is a small island with little career choices or possibilities. When I was 16 I got a scholarship to study in an international school. In order to study abroad I had to be top of my class in Sardinia so I worked hard towards it. I then worked really hard during my time at Aberdeen to make the most out of it given the sacrifices my family and I made.

“The course was long and hard but I have enjoyed most of it. I have really liked 5th year- it's the first time I have felt useful in the wards. I think the course has prepared me well and 5th year was useful to practise being a doctor.”

Next up, Roberta will move to Edinburgh to do her academic foundation years.

“I hope to become a clinician/researcher with an interest in surgical oncology but I will never forget my time in Aberdeen or the friends and staff who helped me during such a difficult time of my life.”