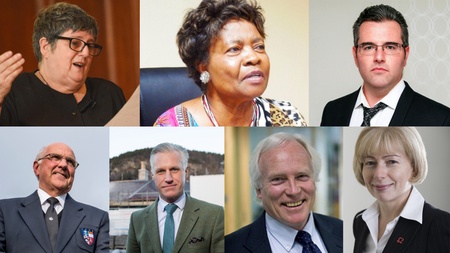 A world renowned conductor, the first Aberdeen and North East Makar, and the Director of one of the biggest research-funding trusts in the UK will be honoured by the University of Aberdeen during its graduations week.

On Tuesday (7.30pm ceremony), poet, novelist, illustrator and singer Sheena Blackhall will receive a Masters of the University. An Aberdeen graduate and the first Makar for Aberdeen and North East of Scotland, Sheena has contributed greatly to the work of the Elphinstone Institute, the Word and May Festivals, and is a champion of the Doric dialect.

Professor Gordon Marshall CBE has been Director of Leverhulme Trust, one of the largest all-subject providers of research funding in the UK, distributing approximately £80m a year. On Wednesday (11am ceremony) he will receive a Doctorate of Science. He has previously been Vice-Chancellor of the University of Reading, Chief Executive of the Economic and Social Research Council, and Official Fellow in Sociology at Nuffield College, Oxford. He was awarded a CBE in 2003 for his services to economic and social science.

Stanley Jack, who was an integral, well respected and beloved Sacrist at the University of Aberdeen from 2001 – 2017 will receive a Masters of the University on Wednesday (3pm ceremony). Following 30 years with Grampian Police, Stan’s role at the University included supervision and management of all University security and support staff, attendants and drivers. He estimates that he gowned between 25-30,000 students at 256 graduation ceremonies, not to mention the countless couples he has helped tie the knot at King’s College as part of his duties.

Robert Gordon Lovie, a highly popular Scottish entertainer, public speaker, compere and broadcaster well known for his distinctive Aberdeenshire style and Doric humour, is to receive a Doctorate Honoris Causa on Thursday (6.30pm ceremony). Throughout his life Robert has been a constant supporter of North East culture, heritage, language and traditional entertainment. An Executive Director for The Princes Foundation in Scotland, Robert is a also trustee for several major Scottish charities.

Michael Zaugg, world renowned conductor, will receive a Doctorate of Music on Thursday (6.30pm ceremony). Greatly respected as an innovator in the art, he is currently Program Director of the residency program ‘Choral Art; at the Banff Centre, Canada. In 2009, he founded the Montreal Choral Institute, dedicated to the advancement of choral education. He was formerly Chorus Master of the Orchestre symphonique de Montréal.

Professor Ruth Oniang’o is a leading academic expert in Food Security and Nutrition with a record of influencing government policies and training numerous young professionals in the field. She will receive a Doctorate of Science on Friday (11am ceremony). She is Editor-in-Chief of the African Journal of Food, Agriculture, Nutrition and Development and spearheaded the completion of Kenya’s food and nutrition policy, facilitated the establishment of nutrition departments in Africa and has given a voice to these issues internationally.

Professor Dame Anna Dominiczak DBE is Regius Professor of Medicine, Vice-Principal and Head of the College of Medical, Veterinary and Life Sciences at the University of Glasgow as well as honorary consultant physician and non-executive member of NHS Greater Glasgow and Clyde Health Board. She will receive a Doctorate of Science on Friday (3pm ceremony). In 2016, she was awarded a DBE for services to cardiovascular and medical science.

Professor Sir Ian Diamond, Principal and Vice-Chancellor of the University of Aberdeen said: “Graduations create a unique atmosphere on campus of celebration, togetherness and tremendous achievement. It is also exemplifies the fantastic diversity of our international student and staff community.

“Graduation is an important milestone enjoyed with family and friends and while for many it may be the end of their stay in Aberdeen as they move onto the next stage of life, each of them will always be a part of this University.

“We also welcome our esteemed honorary graduandes this week. Each of them is recognised as being leaders in their field and an inspiration for others to follow and we are honoured to welcome them into the University community.”