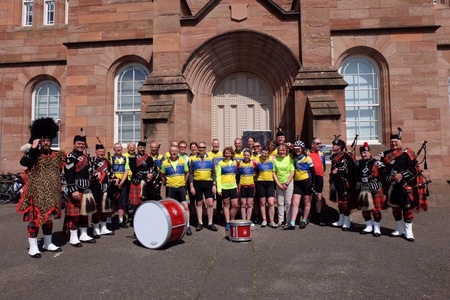 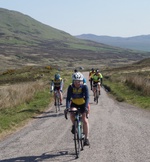 A team of cyclists from the University of Aberdeen have completed the North Coast 500, raising more than £25,000 to support cancer research in the process.

The team, consisting of University staff, NHS Grampian staff and other partners were joined by record breaking round-the-world cyclist Mark Beaumont on the trip around Scotland’s northern coastline.

They completed the trip in eight days and even stopped to hold cancer research and information evenings along the route.

On returning to Inverness at the end of the route, the group were welcomed at Inverness Castle by the Inverness Royal British Legion Pipe Band who themselves had attracted a crowd of tourists.

Whilst some days the team were warmed by glorious sunshine, at other points the plummeting temperatures meant they had to call in the support team to provide them with extra layers to stay warm.

Information evenings in Ullapool and Wick proved popular, with researchers talking about their work and cancer survivors sharing their diagnosis and treatment stories as part of a wider discussion with locals.

We have seen some of the very best scenery our beautiful country has to offer and to raise well in excess of twenty thousand pounds to support cancer research at the University of Aberdeen at the same time has made the whole journey extremely fulfilling." Professor Steve Heys

Professor Steve Heys, a breast cancer surgeon and head of the School of Medicine, Medical Sciences and Nutrition, who set up the team said: “Cycling the North Coast 500 with this group of colleagues and friends has been a fantastic experience. We have seen some of the very best scenery our beautiful country has to offer and to raise well in excess of twenty thousand pounds to support cancer research at the University of Aberdeen at the same time has made the whole journey extremely fulfilling.

“Our awareness event in Ullapool where cancer survivors told their stories and the clinicians and researchers spoke about the latest innovations in cancer treatment were extremely rewarding and worthwhile and I hope the local community who came out thought so too.

“There have been broken chains, flat tyres and more than a few falls and scrapes along the way but we’ve largely come through unscathed and we are all so glad to have been involved.

“The £4.5million target we are working towards to install a new world class cancer research team at the University will have benefits for everyone in the North East and North of Scotland and could see us as become a hub for new clinical trials or trials of new drugs and its been great to get out across the region and spread the word.”

The See Cancer campaign centres around the University’s efforts to develop a programme for cancer research in Aberdeen will save and improve countless lives. Already at the leading edge in a range of different cancer specialisms, the new research team will accelerate vital research to improve how cancer is diagnosed, treated and prevented.