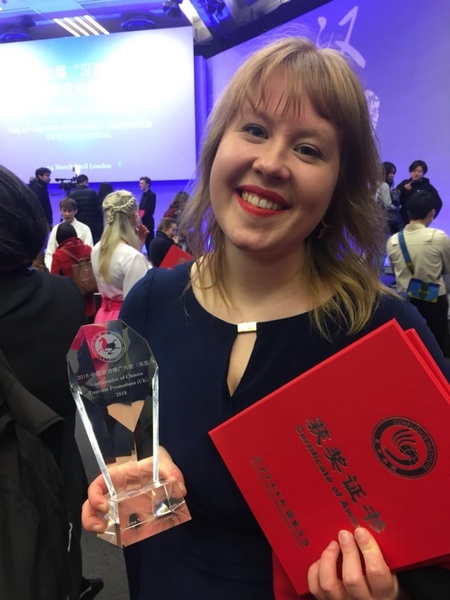 A sociology student from The University of Aberdeen has taken second place in a national competition that tests the abilities of Chinese language learners.

Anna Moilanen, a third year sociology student who studies Mandarin part time at the Confucius Institute, won 2nd prize in the UK final of the Chinese Bridge Proficiency Competition.  Anna also scooped the popular vote seeing off competition from some 31 contestants from 20 universities across the UK.

Anna attended the ceremony held in Queen Elizabeth II centre, London last month to receive her prize - an Ambassador role to represent Chinese tourism in the UK. In addition, Anna has been offered the opportunity to represent the UK in the Global final in China.   This is the second time Anna has attended the Chinese Bridge competition, the first being in 2016 when she won the Most Creative prize.

Of her success Anna said:   “This has been a fantastic opportunity to meet other people who study Chinese and learn more about Chinese culture.  I definitely gained in confidence performing in Chinese and I hope to use my Chinese skills in future endeavours.”

Dr Michelle Macleod, Director of the Confucius Institute of The University of Aberdeen added: “We are tremendously proud of Anna for winning this prize.

“It is notable that all of the other students that made the final stages were studying Chinese as their main degree subject so this really illustrates the dedication and commitment that Anna has applied to learning Chinese language and we are delighted to see this has been rewarded.  Here at the Confucius Institute we aim to provide a cultural bridge between China and the North East and we are thrilled to be able to share in Anna’s success.”