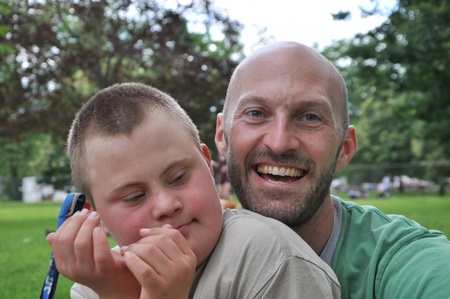 A University of Aberdeen academic who has championed the study of theology and disability has been recognised as 'alumni of the year' by his alma mater.

Dr Brian Brock will be presented the award by Loma Linda University – a flagship medical school based in California – on June 10.

The Reader in Moral and Practical Theology was awarded a Master’s Degree in Biomedical and Clinical Ethics from the institution in 1996 and says it is an honour to be named as 2018’s most notable alumni.

Following his graduation Brock went on to study at the University of Oxford, before he earned his Doctorate in Theological Ethics from King’s College, London but he says his time at Loma Linda had a profound effect on the rest of his academic career.

“The seeds of my doctoral research on the ethics of technological development were planted in discussions of real-world ethical dilemmas at Loma Linda medical school’s weekly Ethical Grand Rounds and led to my first published book in 2010 Christian Ethics in a Technological Age,” he said.

Further graduate work took Brock to Erlangen, Germany, where he wrote on the role of scripture in Christian ethics which was published in 2007 as Singing the Ethos of God: On the Place of Christian Ethics in Scripture. During this time he and his wife Stephanie had their first child, Adam, who has Down’s syndrome.

The University of Aberdeen offered Brock his first full time academic post in Moral and Practical Theology, where he has now taught for 13 years. At Aberdeen his interest in medical ethics gravitated toward disability issues, and with his colleague Professor John Swinton he has pursued a range of scholarly projects from which a string of edited books have issued, including: Theology, Disability and the New Genetics: Why Science Needs the Church (in 2007), and Disability in the Christian Tradition: A Reader (in 2011). The latter is now the standard university textbook in courses on disability theology.

Aberdeen’s Divinity Department has subsequently been recognized as a world leader in disability theology.

Dr Brock is also Managing Editor of the peer reviewed Journal of Disability and Religion, one of the founding members of the European Society for the Study of Disability, and is currently spearheading the Friendship House initiative, a cooperative project between local churches, government agencies and support organizations that brings adults with learning difficulties into the heart of the University of Aberdeen for weekly meals and events with students and faculty.

He added: "Disability is a difficult theme for medical schools devoted to teaching people to healing. This award from a flagship medical school is an encouraging sign that this is starting to change, and that the good work being done at the University of Aberdeen is becoming so widely recognized."