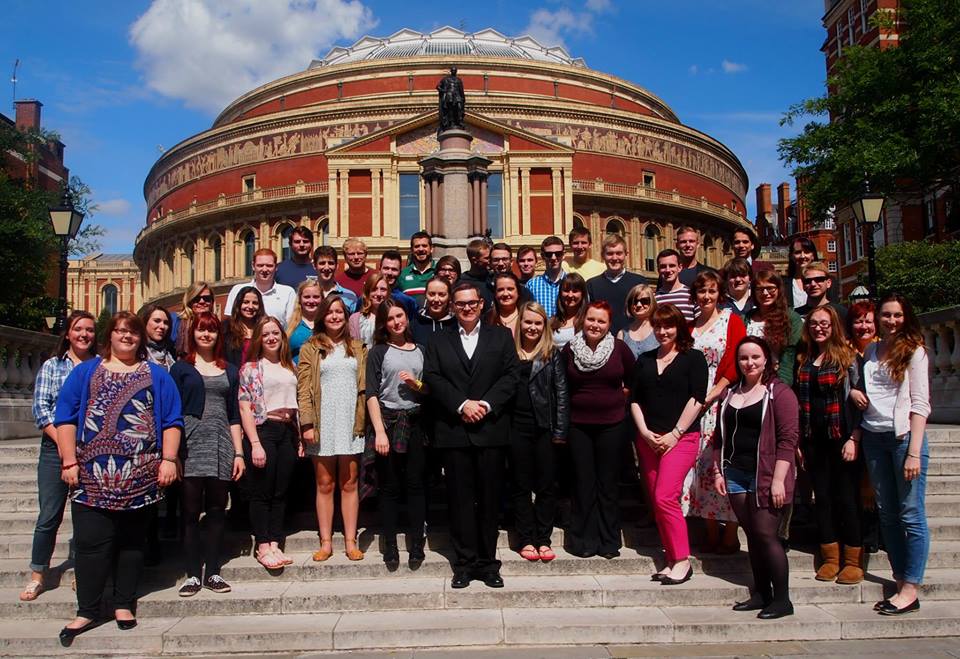 The University of Aberdeen's Chamber Choir will perform in the world's largest music festival as part of the BBC Proms Youth Choir.

The BBC Proms Youth Choir was created in 2012 to bring together the best young singers from across the UK and create a massed youth choir with opportunities to perform at the highest level with professional symphony orchestras.

The Chamber Choir will sing with the University of Birmingham Voices, the North East Youth Choir and the Proms Youth Choir Academy at the Royal Albert Hall.

It is the third time the group has been invited to join the massed ensemble which for 2018 will be led by the internationally-renowned Donald Runnicles and will perform a new work, commissioned by the BBC Proms, by Latvian composer Ēriks Ešenvalds. The concert will culminate in a performance of Beethoven’s Symphony No. 9 (‘Choral’) with the World Orchestra for Peace.

This year’s Proms are the latest in a line of high-profile engagement for the choir, which is garnering a growing international reputation for the quality of its work.

Directed by Professor Paul Mealor, the Chamber choir has performed regularly at Balmoral for Her Majesty The Queen, for Their Royal Highnesses The Duke and Duchess of Rothesay, and featured regularly on radio and television.

Their debut CD, ‘Immortal Memory’ was disc of the week on Classic FM and charted at No 3 in the Classical Charts and a recent tour of Poland saw them perform to sell out audiences. The choir will also head to New York this term to represent the University of Aberdeen at a number of events.

Ahead of the Proms performance on Saturday July 21, the choir will take part in a four-day intensive rehearsal residency which enable participants to immerse themselves in singing, meet other young singers from across the UK whilst developing their vocal skills to new levels.

Chamber choir member James Aburn, who is in the fourth year of a Bachelor of Music degree, said the ensemble were thrilled to be taking part in the performance which will be broadcast live on BBC Radio 3.

“As a music student at the University of Aberdeen the opportunities to perform on one of the world's biggest stages with top professional musicians and conductors is truly unique,” he said.

“It is so exciting to be involved in one of the most famous music festivals in the world, performing the best music ever written.

“Being a part of the Chamber Choir has enabled me to work alongside established names within the music industry and is really helping to prepare me as a musician and opens new doors for life after my degree. These opportunities really make Aberdeen an incredible place to come and study music.”

Cassandra Humble, who is originally from Australia and is studying for an MSc in Strategic Studies joined the Chamber Choir in September.

She added: “The opportunity to be involved in the 2018 Proms is fantastic on so many levels but primarily for the chance to sing with other renowned choirs from across the UK as well as work with esteemed conductors and orchestras. Moreover, the BBC Proms is something friends and family back home recognise and understand the significance of, which makes it that much more special to be involved.

“When I auditioned I didn’t fully appreciate the calibre of the choir and have been amazed by the musical opportunities it offers. Over the last seven months I’ve been fortunate to take part in master classes, world premier performances and solo opportunities. The choir has become my second family and I've loved watching each member develop their singing and gain confidence over this time, myself included.

“Being part of the University of Aberdeen Chamber Choir has definitely enhanced my time at Aberdeen and has been a welcome lifestyle balance along my ongoing academic studies.”

Professor Paul Mealor, director of the Chamber Choir, added: “We have a wonderfully talented group of singers here at the University and this is another fantastic opportunity for them to showcase the incredible standard of their work. We hope everyone enjoys the performance both at the Proms and on the Radio 3 live broadcast.”

The event is taking place on Saturday 21 July 2018 at the Royal Albert Hall at 7.30pm and will be broadcast live on BBC Radio 3.