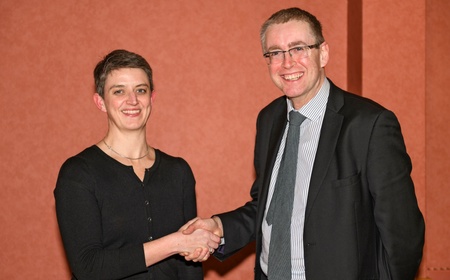 Maggie Chapman has been re-elected by students as Rector of the University of Aberdeen.

Ms Chapman, who is co-convener of the Scottish Green Party, accumulated 1248 votes under the transferable vote system.  Her closest rival, law student Israr Khan, came in second place with 891 votes.  Overall turnout was 15.9%, with 2427 votes cast.

Speaking after the result, she said: “I am delighted to have been re-elected as Rector of the University of Aberdeen.

“I would like to say a huge thank you to my campaign team who have worked so hard, and to all those who voted for me and have put their faith in me to deliver my manifesto.

“I look forward to working with students in the next three years to protect EU and International students, to work for student workers’ rights, to ensure student accommodation becomes more affordable for all, and to deliver all the other pledges from my campaign manifesto.”

I would like to say a huge thank you to my campaign team who have worked so hard, and to all those who voted for me" Maggie Chapman

Ms Chapman was first elected as Rector in 2014, and over the last three years has chaired the University Court and developed a close working relationship with the Aberdeen University Students’ Association (AUSA).

As well as her position within the Scottish Green Party she was a member of the Smith Commission and of COSLA’s Commission on Strengthening Local Democracy.  She is the Chief Executive of the Scottish Council on Visual Impairment, and has also worked in the women’s sector and as a geography lecturer at Edinburgh Napier University.

Congratulating Ms Chapman on her election success, AUSA President Lawson Ogubie, said: "We are very pleased to see that the Rectorial elections 2018 have been successfully concluded and results announced. We heartily accept the results as a reflection of the students’ voice.

“On behalf of the Students’ Association I congratulate Maggie Chapman on her re-election as our Rector and we look forward to working with her again.

“We would also like to thank the Elections Committee for all their hard work during this process and to all students for their participation in the elections.”