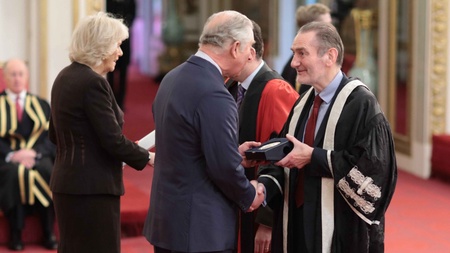 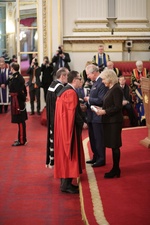 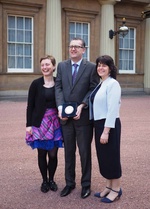 The University of Aberdeen was presented with the Queen's Anniversary Prize for Higher and Further Education at a ceremony in Buckingham Palace.

The award - the highest national honour for a UK university was awarded in recognition of the University’s world-leading research into health services over the last 40 years.

This work has changed millions of lives all over the world. For example, Aberdeen research provided the underpinning evidence for the introduction of robotic surgery for prostate cancer. Previously, the balance of potential harms and benefits was unknown. The research demonstrated that robotic surgery was beneficial resulting in the purchase of surgical robots across the UK. The research also transformed nationwide antibiotic prescribing in general dental practice - University of Aberdeen-developed interventions produced a 7% reduction in annual antibiotic prescribing compared to usual practice.

The University’s work also led to the recommendation that women should not receive multiple embryos when undergoing IVF treatment. Previously, several embryos were transferred in order to maximise the chances of success. However, this led to multiple births and serious risks to the mother and children. Aberdeen research showed that the chances of success were not reduced when only one embryo was transferred. This is now accepted practice worldwide.

We are incredibly proud to have the achievements of the Health Services Research Unit and the Health Economics Research Unit recognised with this prestigious Queen's Anniversary prize." Professor Sir Ian Diamond, Principal of the University of Aberdeen

The teams also conducted the research and economic modelling which underpinned the ban on smoking in public places in Scotland. Our predictions proved correct, with subsequent studies showing substantial declines in childhood asthma, pregnancy complications and heart problems.

Researchers at Aberdeen have developed new methods to help test whether new treatments work. As well as finding ways to test the benefits of new surgical procedures, they developed ways of including patient’s views when evaluating the benefits of medicines and treatments. The method has been widely adopted by national and international policy makers.

The Queen’s Anniversary prize is awarded once every two years to recognise world-class excellence and achievement. Established in 1993, the honour is distinctive in being granted to the whole institution. It is the UK’s most prestigious form of national recognition open to a UK academic or vocational institution.