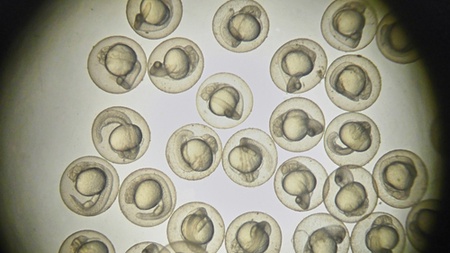 The components of a controversial drug, allegedly linked to birth defects in the 1960s and '70s, caused deformations to fish embryos just hours after they received a dose in new studies by researchers at the University of Aberdeen.

Primodos was a hormone pregnancy test used by thousands of women in the UK between 1958 and 1978.

Research at the time suggested the drug could be linked to a higher risk of women giving birth to babies with abnormalities – a claim denied by Primodos’ manufacturer.

Although Primodos is no longer in use, its components (Norethisterone acetate and Ethinyl estradiol) are used in other medications today including treatments for endometriosis and contraceptives.

In November last year a UK Government expert working group (EWG) study found no ‘causal association’ between the drug and the abnormalities, stating that outdated methods used by scientists in the 1970s was partly responsible for a failure to find a connection.

Now a new study at the University of Aberdeen, published today in the Scientific Reports journal, has revealed more about the effects of Primodos’ components on the embryos of zebrafish

The paper outlines how after the components of Primodos  were added to water around zebrafish embryos, their movement slowed down rapidly; developed changes to the heart within four hours; and within 24 hours displayed damage to tissues such as the fins, eyes and spinal cords.

What this study highlights is that there is a lot still to be learned about Primodos and more widely its components effects on mammals." Dr Neil Vargesson

More surprisingly, according to the researchers, the study showed that the drug accumulates in the zebrafish embryo over time. They suggest that if this also occurs in a mammalian species that even a seemingly low dose of the drug for the mother could result in much higher levels for the embryo.

This latest study was led by Dr Neil Vargesson from the University of Aberdeen, who has also published extensive research into thalidomide – a drug used in Germany in the 1950s to treat morning sickness but which caused thousands of babies worldwide to be born with malformed limbs.

He hopes this new study will prompt new funds to research further into the effects of Primodos’ components on mammals.

“At the moment the scientific research into whether or not Primodos caused these birth defects is inconclusive,” Dr Vargesson explains.

“What this study highlights is that there is a lot still to be learned about Primodos and more widely its components effects on mammals.

“Our experiments with the zebrafish embryos shows quite clearly the effects the Primodos components have. This does not mean it would do the same in humans of course, we are a long way from saying that but we need to carry out more research into these components because they are still in drugs today and in some cases in much higher doses than those found in Primodos.

“The assumption by some previously has been that the doses given to mothers was too low to cause any damage but our study shows that the levels of Primodos’ components accumulate in the embryos over time because they don’t have a fully functional liver that can break down the drug. This too is new information and if the same thing happens in mammals, these drugs could build up in the embryo to much higher levels than shown in the mother’s blood.”