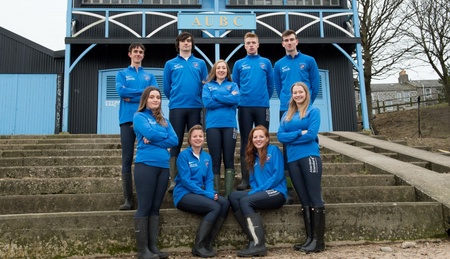 Following months of trials and tests, the final crews have been for the 23rd annual Aberdeen Boat Race, which takes place on Saturday, March 17.

They have been assessing each rower on their technical skill and performance during races since the academic year began in September.

Both Henry and Erin have assembled their perfect crews, singling out the best local talent as well as enlisting experienced rowers from around the world. The two crews will battle it out over a 3.5km course on the River Dee this March, in a race sponsored by Aberdeen Standard Investments.

Representing the University of Aberdeen are:

Rebecca Elliott (20) from Elgin; Karlign Korpershoek (22) from Uithuizen, The Netherlands; Adam Wilson (19) from Aberdeen; Kate Ferrier (19) from Hereford; Cameron Grant (22) from Glasgow; Lachlan Cowie (22) from North Kessock; Ruth Grant (21) from Edinburgh; and Alex Zabala (19) from A Coruna, Spain. The cox is Laura Henderson (21) from Glasgow.

Rowing for Robert Gordon University are:

These rowers have an opportunity to go down in the history books so I know they will be out on the river as often as possible between now and the big day " Professor Sir Ian Diamond, Principal

Katherine Lawrie (20) from Stonehaven; Scott Murray (25) from Inverurie; Charlotte Riley (25) from London; Lizzie Buchan (18) from Edinburgh; and Gary Wilson (25), Gregor Pittendreigh (20), Erin Wyness (21) and Andrew Main (21) all from Aberdeen. The cox is Kathryn Duthie (22) from Dunfermline.

Martin Gilbert, co-chief executive of title sponsors Aberdeen Standard Investments, says, “The Aberdeen Boat Race allows both the University of Aberdeen and Robert Gordon University to showcase some of their finest student athletes in a competition that – every year – gets closer and closer. The next five weeks are vital for both crews as they prepare not only physically, but also mentally for the challenge ahead. We are proud to sponsor the Aberdeen Boat Race again and are always delighted to see the students excelling in sport and fitness alongside their studies.”

Professor Sir Ian Diamond, Principal and Vice-Chancellor of the University of Aberdeen, says: “The crews now know who they are competing against and I'm sure that will give them an extra incentive in their training. These rowers have an opportunity to go down in the history books so I know they will be out on the river as often as possible between now and the big day trying to shave vital seconds off their time.  I look forward to another close and exciting race in March.”

Professor Ferdinand von Prondzynski, Principal of Robert Gordon University, says, “Each crew looks strong this year, and it is impossible to predict who will come out on top. By the time the Aberdeen Boat Race takes place in March, the crews will have made enormous efforts to achieve peak fitness. I hope that the people of Aberdeen will join me on the riverbank to cheer them across the finish line. May the best team win.”