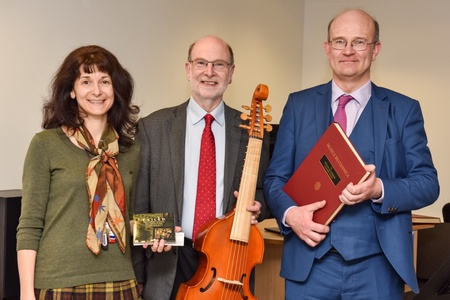 The University of Aberdeen's record label, Vox Regis, has launched its latest CD which will help raise funds for vital research at the University.

Exiled: Music by Philips and Dering is a celebration of music by two exiled English Catholic composers, whose pieces are featured in the scholarly series, Musica Britannica. Most of the CD tracks have been edited and reproduced by Professor of Music and Master of Chapel and Ceremonial Music at the University, David Smith.

Music on the CD is performed by the internationally acclaimed Rose Consort, with the University’s Choir of King’s College joining them for two motets.

The CD is available to pre-order from Amazon and will be available from retailers from December 11, with proceeds from the sales going towards cardiac research.

The recording includes consort and keyboard versions of the Paget Pavan and Galliard, a piece which Philips dedicated to ‘Paget’ - probably the notorious double agent, Charles Paget, for whomPhilips undertook a spying mission in 1593 resulting in his imprisonment at The Hague.

Another piece by Philips, the 1580 Pavan, was a ‘hit’ of its day. It was widely arranged in a manner not dissimilar to that in which popular artists sing covers of existing songs today, but as the original no longer exists, Professor Smith reconstructed it using the earliest surviving arrangements.

Professor David Smith commented: “I am absolutely delighted that our record label is officially launching its latest CD, Exiled: Music by Philips and Dering

It is also particularly exciting to see our student choir having the opportunity to perform with the Rose Consort, and I am extremely proud of what they have produced together." Professor David Smith

“This has been a fantastic project to work on as the music, and indeed the stories behind some music by Peter Philips and Richard Dering, is absolutely fascinating. It is exciting to hear the music I have edited over a period of seven or eight years performed so beautifully by The Rose Consort.

“It is also particularly exciting to see our student choir having the opportunity to perform with the Rose Consort, and I am extremely proud of what they have produced together.

“Of course, one of the main aims of Vox Regis is to raise funds, and for this project we are raising money for research into Takotsubo syndrome or as it is perhaps better known ‘broken heart syndrome.”

Takotsubo cardiomyopathy (TC), commonly known as ‘broken heart syndrome’, is a condition where a person’s heart suffers physical symptoms similar to a heart attack as a result of intense emotional trauma. Historically, TC was thought to be a temporary condition, with sufferers able to recover fully without medical intervention. However researchers at the University of Aberdeen have shown that TC actually causes long lasting damage to the heart muscle, leading to long-term survival rates comparable to those afflicted by the more common types of heart attack. Dr Dana Dawson is leading the team investigating the causes, effects and possible treatments for this potentially fatal condition.