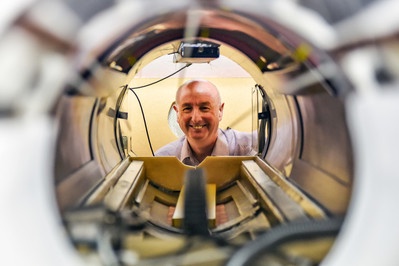 A team at the University of Aberdeen has scanned the first group of patients using a ground-breaking 'Fast Field Cycling' MRI scanner. The patients had all suffered strokes and agreed to be the first in the world to be scanned by the new machine.

Today’s announcement marks another milestone in the University’s long association with MRI machines.  In the 1970s, a team at the University built the first full-body MRI scanner and used it to obtain the first clinically useful image of a patient.  MRI scans are now a routine part of healthcare.

MRI scanners use a large magnet along with pulses of radiowaves to create detailed pictures of a patient’s anatomy, but Fast Field Cycling scanners are able to extract much more information by switching the strength of the magnetic field during the scanning procedure.   The technology has been under development for the last ten years.

Research group leader, Professor David Lurie, said “Because FFC scanners can switch their magnetic field, it is almost like having 100 different MRI scanners in one. This gives an extra dimension to the data collected from each patient, greatly expanding the diagnostic potential.” He continued, “It is incredibly exciting to have imaged our first patients. This is a major step towards our technology being adopted by hospitals to benefit patients, which is the ultimate goal of our research.”

The team, based at the University’s School of Medicine, Medical Sciences & Nutrition, has already shown the potential benefit of FFC-MRI for diagnosis by studying tissues obtained from patients who have had surgery. Now, for the first time, their prototype scanner – unique in the World – has been used to image the brains of patients who have recently suffered from a stroke. It is hoped that the extra information coming from Fast Field Cycling-MRI will help doctors better delineate the brain tissue around the stroke-affected part of the brain, helping to plan treatment and monitor recovery.

It is incredibly exciting to have imaged our first patients. This is a major step towards our technology being adopted by hospitals to benefit patients, which is the ultimate goal of our research." Professor David Lurie

The study is called “PUFFINS” and is being led by consultant and senior lecturer Dr Mary Joan MacLeod. She said: “Treatments for stroke have to be given very early to be effective, and the CT scans patients currently undergo on admission to hospital give us limited information to help plan that treatment.  The Fast Field Cycling scanner has great potential, because it might give more accurate ‘real time’ information on what is happening in the brain tissue, helping to direct treatment.”

One of the first patients in the study, 81 year old Richard Johnson, said: “This is a very exciting project. I am full of admiration for the development and construction of this sophisticated machine, and the aims behind it. I wouldn’t have missed this interesting session for the world!”

Mr Johnson underwent a scan last month after suffering a stroke.  He added, “I saw one of the early prototype Magnetic Resonance apparatuses in the Biomedical-Physics Department in around 1964 or 1965 - which is partly why I was so excited to be a guinea pig in, and to be lucky enough to be shown round, the new machine.”

The Aberdeen team behind FFC-MRI is leading a 9-strong consortium of research groups from 6 different countries, in a project called “IDentIFY” which received a €6.60 million Horizon 2020 research grant from the European Union to develop the imaging technology and bring it closer to widespread use in hospitals.