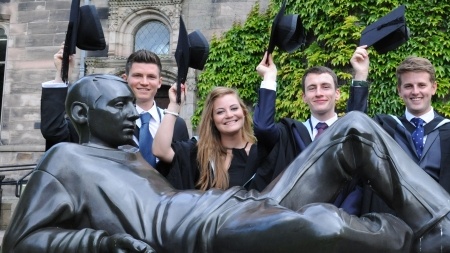 A nobel laureate, a Scottish business leader, a composer and the BBC's Security correspondent are among those who will be honoured by the University of Aberdeen at its Winter Graduation ceremonies this week (23 and 24 November).

On Thursday Anita Frew will be presented with a Degree Honoris Causa in recognition of her management experience across a range of different sectors, including banking, asset management, manufacturing and utilities. She is Chairman of Croda International Plc and Deputy Chairman of Lloyds Banking Group plc. As well as her roles in commercial organisations, she has also been a pro bono non-executive director of various artistic organisations, including the Donmar Warehouse and the Gate Theatre.

On Friday, Aberdeen born physicist Professor John Michael Kosterlitz will receive a Doctorate of Science from the University. Professor Kosterlitz’ research has centred on condensed matter theory, one and two-dimensional physics; in phase transitions: random systems, electron localisation, and spin glasses; and in critical dynamics: melting and freezing. In 2016 the Royal Swedish Academy of Sciences awarded Professor J Michael Kosterlitz the Nobel Prize in Physics “for theoretical discoveries of topological phase transitions and topological phases of matter.

Professor Kosterlitz is the second member of his family to join the Aberdeen family, as his late father was an eminent biochemist and member of staff at the University.

Graduations are a special time in the University calendar as it gives us an opportunity to come together to celebrate the achievements of our students and also our new honorary degree recipients." Professor Sir Ian Diamond

Friday will also see Frank Gardner, OBE, receive a Doctorate of Literature. A distinguished journalist and foreign correspondent, he is currently the BBC’s Security Correspondent. Frank became a journalist after spending nine years working as an investment banker. He has reported extensively on the global ‘War on Terror’ in Guantanamo Bay, Yemen, Afghanistan, Iraq and elsewhere in the Middle East. In 2004 he survived being shot six times at close range by Al-Qaeda terrorists in a Riyadh suburb in Saudia Arabia. He went on to write the best-selling book Blood and Sand.

Professor Sir Ian Diamond, Principal and Vice-Chancellor of the University, commented: “Graduations are a special time in the University calendar as it gives us an opportunity to come together to celebrate the achievements of our students and also our new honorary degree recipients.

“All our graduating students should feel immensely proud of what they have achieved, and I hope they leave their ceremonies feeling inspired and ready to face whatever challenges come next in their journeys.

“Graduation ceremonies also provide us with the opportunity to welcome our new Honorary Graduates to the Aberdeen family, and I am delighted to have the honour of doing so for these extremely accomplished and distinguished individuals.”

Thursday 23 November at 11am