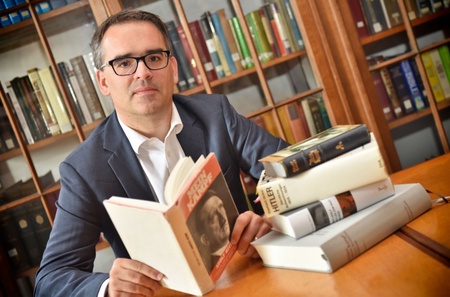 A leading historian from the University of Aberdeen has authored a new book that charts Adolf Hitler's rise from loner to lethal demagogue, contesting that he was little more than a product of his environment.

‘Becoming Hitler: The Making of a Nazi’ is Professor Thomas Weber’s latest examination of the emergence of Hitler as a demagogue, following on from his award-winning ‘Hitler’s First War’ published in 2010.

According to Brendan Simms, Professor in the History of International Relations at Cambridge University, Weber’s book shows that, in establishing himself, Hitler “swum against the Bavarian mainstream and was nearly drowned by it.”

As Weber demonstrates, an Irish volunteer in the German army even had to rescue Hitler from being beaten up by other soldiers to whom he was speaking as a propagandist in post-revolutionary Munich.

The book presents evidence that the Munich establishment did not open its doors to Hitler during his formative years, all the while still accepting Jews in their midst.  Weber shows for the first time that Jews were, in fact, overrepresented in Freikorps in Bavaria, the right wing militias in post war Germany which usually are seen as incubators of Nazi ideology.

Commenting on his new book, Professor Weber, said: “It has been fascinating to see how the common view that Hitler became Hitler by soaking up mainstream conservative ideas in post-revolutionary Munich does not add up.

“At a time at which the conservative establishment of Munich still shunned him, the most important people for Hitler were like him recent migrants to the city such as Helene Hanfstaengl, known by everyone as ‘the German girl from New York’.”

Weber added: “Hitler initially rose to prominence by becoming the champion of recent migrants to Munich and a small sub-section of the established populace.

It has been fascinating to see how the common view that Hitler became Hitler by soaking up mainstream conservative ideas in post-revolutionary Munich does not add up. " Professor Thomas Weber

“He subsequently presented himself to the Bavarian establishment as someone who as a ‘drummer’ was willing to do their bidding, but in reality he was cleverly making the case for a new kind of political leader with characteristics that only he possessed.”

Weber presents evidence that the first Hitler biography - published during his rise to power and thought to have been written by an aristocratic German war hero – was almost certainly self-penned, and meant to market himself to those who had previously shunned him.

Professor Weber’s book, which coincides with the anniversary of Kristallnacht, also presents new evidence that Hitler already had a preferred  ‘Final Solution’ in the early 1920s and that he secretly colluded with Russian nationalists in an attempt to put Germany and Russia on an equal footing with the Anglo-American world.

As part of a series of engagements taking place in the US and UK this week, Professor Weber will discuss his book at an event in Washington DC tonight (‘The West in 2020: A View From Europe’s Past’), hosted by the University of Aberdeen Development Trust and the Bipartisan Policy Center.

This will be followed by a subsequent appearance as part of the University’s ESRC Festival of Social Science on Saturday (November 11), where he will participate in a panel discussion on ‘Understanding Hitler in the 21st Century’.

The panel, which takes place on Remembrance Day, will also feature Sophie von Bechtolsheim, the granddaughter of Claus Schenk Graf von Stauffenberg, the leading member of the failed plot to assassinate Hitler in 1944, as well as the senior German diplomat Ulrich Schlie.

Weber, Bechtolsheim, and Schlie will discuss both what the lessons of the story of the making of Hitler are for the present and what the legacy of those who actively fought Hitler is for our own times.

‘Becoming Hitler: The Making of a Nazi’ by Thomas Weber is published by Oxford University Press in the United Kingdom and Ireland, and by Basic Books in North America.

Festival of Social Science 2017 - Understanding Hitler in the 21st Century