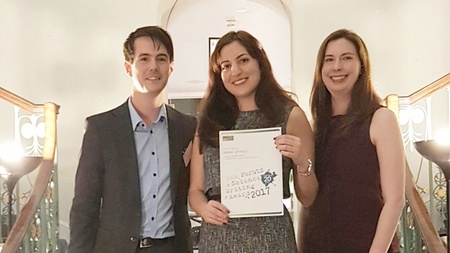 A University PhD student working with the Aberdeen Fungal Group was shortlisted for a prestigious MRC award.

Maria Spyrou was named one of the final 14 in the 2017 Max Perutz Science Writing Award for her layman’s essay about her research about how fungal cells split.

Shortlisted articles had to explain why the author’s research is important; explain the research in any easy to understand way; and be written in a compelling way.

Maria attended the award ceremony at the Royal Institution in London for the prize on October 19 where she met with other shortlisted students and attended a science writing masterclass.

The awards were announced by the MRC Chairman and Chair of the judging panel, Donald Brydon CBE, alongside Director of the MRC Laboratory of Molecular Biology and fellow competition judge, Sir Hugh Pelham, and Professor Robin Perutz, son of the late Max Perutz.

Commenting on this year’s competition, Mr Brydon said: “Again young scientists have shown they can communicate their passion for science to a wide audience. The standard of entries was very high and the winner strikes just the right chord in tune with our increasingly data-driven world.”

Fellow competition judge Andy Ridgway added: “Sometimes you read something and it stays with you for days. It transforms your view of a challenge or issue you were already aware of, or it opens your eyes to one that you were completely oblivious to. Many of the shortlisted entries did this very effectively, demonstrating the importance of the quest for answers that lies at the heart of the research being explained. Good writing inspires, intrigues and changes the readers’ view of the world and these entries show how powerful words on a screen or page can be.”

The award is named after the eminent scientist and Nobel Laureate Dr Max Perutz, an accomplished and natural communicator who died in 2002. Since the competition began in 1998, hundreds of MRC researchers have submitted entries and taken their first steps in communicating their research to the public.

The overall award was won by Kirstin Leslie from the University of Glasgow for her article Can big data mend a broken heart?

You can read Maria’s article here.