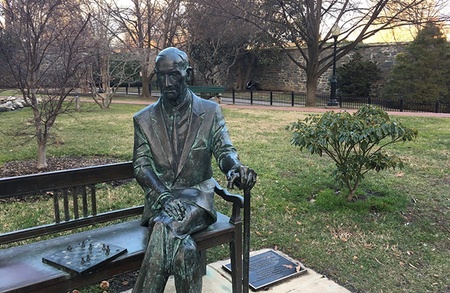 An exhibition celebrating the life and achievements of Polish World War II resistance fighter and Georgetown University professor, Jan Karski, has gone on display at the University of Aberdeen's Sir Duncan Rice Library.

During the Second World War, Karski worked as a courier for the Polish Underground resistance in the Polish struggle against foreign occupation, and was the first person to inform the Allies of the Holocaust committed on Polish territory.

Having survived a Soviet labour camp, Karski was captured by the Nazis. He attempted suicide, fearing he might break under the torture he experienced, but then escaped and continued smuggling information out of Poland which he sent to the Polish Government in exile in France and then in England. Smuggled into Warsaw’s Jewish Ghetto he later described the horrors witnessed there: “This was not the world. It was not humanity, it was some hell.” In 1942 Karski personally delivered his accounts of Nazi atrocities committed against Jews to the British Foreign Secretary Anthony Eden, and a year later to the US President Franklin D. Roosevelt. His reports were not believed. Karski called the refusal of the world to accept the news about the Holocaust “Humanity’s second original sin.”

The exhibition is a result of the cooperation between the Polish History Museum Warsaw, the Polish Ministry of Foreign Affairs and the Jan Karski Educational Foundation.

Professor Karin Friedrich, who specialises on Polish history at the University of Aberdeen, is grateful to the Polish consulate for lending this exhibition. She said: “This exhibition gives an example of personal bravery and fierce resistance against evil in very dark times. Jan Karski belongs to the more than 6,000 Poles who heroically defied German orders and the threat of execution by helping Jews. It is for his role in revealing to the world the horror of the Holocaust and the situation in the Warsaw Ghetto that he was awarded with the ‘Righteous Among the Nations’ title by Yad Vashem.

This exhibition gives an example of personal bravery and fierce resistance against evil in very dark times." Professor Karin Friedrich

“I was lucky enough to be taught by Jan Karski while studying for my PhD at Georgetown University. He was a charismatic figure, even in old age, highly articulate and an impressive lecturer. He is an inspiration to everyone with a sense of justice in a world where misery and violence continue to exist, and I am thrilled that this special exhibition has come to the University of Aberdeen.”

Karski’s book, Story of a Secret State, was published in 1944 in the United States and became an overnight best-seller. His lifetime of service to humanity – as an emissary, as a voice of conscience and later as a distinguished educator at Georgetown University (Washingon D.C.) – places him in the first rank of 20th century world figures. He received the Order of the White Eagle, the Silver Cross of the Virtuti Militari and the Home Army Cross. He died in 2000, aged 86. Karski’s extraordinary legacy was recognized by President Barack Obama in 2012, when he was decorated posthumously with the Presidential Medal of Freedom, America’s highest civilian honour.

The exhibition has toured to Stormont Palace and the Polish Consulate in Edinburgh, and will be on display at the Sir Duncan Rice Library in Aberdeen from 16 October 2017.