Scientists to visit mysterious marine ecosystem which was hidden for 120,000 years
19 October 2017 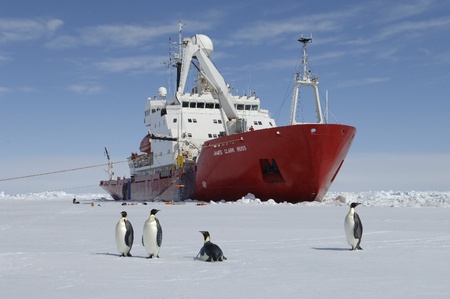 Scientists from the University of Aberdeen are part of an expedition led by British Antarctic Survey (BAS) which is planning an urgent mission to investigate a mysterious marine ecosystem that's been hidden beneath an Antarctic ice shelf for up to 120,000 years.

The researchers want to discover how this marine ecosystem will respond to environmental change in a climate-sensitive region.

The massive calving of the Larsen C Ice Shelf A68 iceberg, which is four times the size of London, exposes around 5,818 km2 of seabed.  The research team is planning a ship-borne research cruise to the region before the biological communities there begin to change following the movement of the giant iceberg.  However, they can only achieve this if the iceberg continues on its path away from the remaining ice shelf.

Satellite monitoring will reveal options for navigating through the sea ice.  All being well the team will spend three weeks in February 2018 on board the BAS research ship RRS James Clark Ross.

Marine biologist Dr Katrin Linse from British Antarctic Survey who is leading the mission said: “We have a unique opportunity to study how marine life responds to a dramatic environmental change.  Normally, it takes years to plan the logistics for marine research cruises.  Our funder, NERC and our ship operations team recognise the urgency to act quickly.  Everyone is pulling out the stops to make this happen.  All we need now is for the iceberg to move far enough away from the remaining shelf and the sea ice to melt so that we can navigate safely.

“It’s exciting to think about what we might find. Using a range of different techniques, our multi-disciplinary approach by an international team, will examine the marine ecosystem spanning the water column from the surface of the ocean all the way to the seabed and the sediment.”

The Aberdeen team, led by Professor Ursula Witte, will be investigating the ecosystem functioning of the area, rather than biodiversity.

Professor Witte commented: “We are the only group in this interdisciplinary team that will directly measure ecosystem functions and are extremely excited about this once-in-a-lifetime opportunity to observe 'live' the impact of rapid and drastic environmental change on deep-sea ecosystems."

This newly exposed marine area is the first to activate an international agreement made in 2016 by the Commission for the Conservation of Antarctic Marine Living Resources (CCAMLR).  This agreement designates Special Areas for Scientific Study in newly-exposed marine areas following the collapse or retreat of ice shelves across the Antarctic. The agreement came following a European Union proposal to CCAMLR, led by British Antarctic Survey (BAS) scientists.

The new Special Area for Scientific Study meets the CCAMLR criteria to be automatically designated for an initial period of two years, which is likely to be extended to ten years following further consideration by CCAMLR Members. This will allow for scientific research to be undertaken in the area without any impact from commercial fishing, to address questions relating to how biological communities develop over time, and how new species colonise previously ice-covered areas.

CCAMLR Members agreed Conservation Measure 24-04 on “Establishing time-limited Special Areas for Scientific Study in newly exposed marine areas following ice-shelf retreat or collapse in Statistical Subareas 48.1, 48.5 and 88.3” in 2016, following a proposal by the European Union and its Member States, led by UK scientists. The Conservation Measure sets out criteria by which Stage 1 Special Areas are automatically designated for an initial period of 2 years following the notification of all Members of the location and extent of the proposed area. Further information on the characteristics of the Special Area are then considered by the CCAMLR Scientific Committee and its Working Groups, which provides advice to the Commission on the designation of a Stage 2 Special Area for a further 10 year period. Members are encouraged to undertake research in Special Areas for Scientific Study, particularly in order to understand ecosystem processes in relation to climate change. Research fishing activities are only permitted under certain conditions, with the agreement of the Scientific Committee. More about CCAMLR here