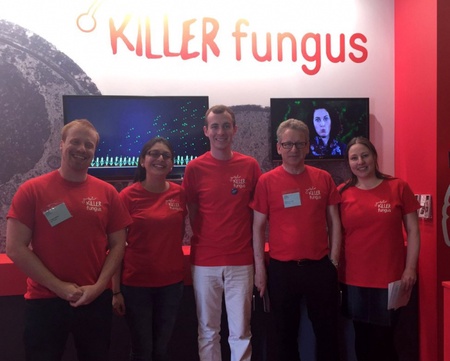 World leading research from one European and 12 UK universities including Aberdeen and Manchester, and which focuses on potentially deadly fungi, is being showcased in a fun and innovative way at one of the country's leading science festivals.

A new and enhanced version of the popular Killer Fungus exhibit will feature amongst the attractions at the Manchester Science Festival.

Participants will have the chance to play Killer Fungus computer games, explore fungal disease with 3D printed fungi and a human manikin, join in arts and crafts activities and view a time-lapse video of fungal infection spreading.

A new app-based, role-playing game called OUTBREAK! will challenge families and friends in a race against time to stop the spread of a deadly fungal disease.

We're delighted to be joining our colleagues in the MFIG to take the popular Killer Fungus exhibit to the Manchester Science Festival. " Professor Neil Gow

The Aberdeen Fungal Group (AFG) and the Manchester Fungal Infection Group (MFIG) are two of the world’s leading centres of excellence in medical mycology. Aberdeen is the holder of a Wellcome Trust Strategic Award for Medical Mycology and Fungal Immunology (WTSA MMFI), from where the concept for Killer Fungus originated.  MFIG is the world’s largest grouping of clinical and academic scientists working on mould infections of humans.

The exhibit was generously funded by the WTSA MMFI, British Mycological Society, the British Society for Medical Mycology, The Microbiology Society, King’s College London Dental Institute and the International Society for Human and Animal Mycology, and was first exhibited at the Royal Society Summer Science Exhibition in 2016.  The exhibit is based on the research being carried out by Aberdeen and Manchester, in collaboration with others, and aims to inform the public about the under-publicised role that fungi play in our lives.

Professor Neil Gow, of the AFG and Director of the WTSA MMFI, said: “We’re delighted to be joining our colleagues in the MFIG to take the popular Killer Fungus exhibit to the Manchester Science Festival. The exhibit helps shed light on the massive role fungi plays in our planet’s ecosystem. Although often our friends, as the source of many essential foods and pharmaceutical products, fungi are also one of the world’s most important causes of life-threatening human infections.”

MFIG co-Director, Dr Elaine Bignell, said “It’s a privilege to work with Aberdeen to bring the Wellcome Trust-funded Killer Fungus exhibit to the Manchester Science Festival and we are very excited to debut the OUTBREAK! gaming experience at the Manchester Museum of Science and Industry. The 2017 event in Manchester is an important continuation of the inaugural Killer Fungus exhibit which will allow us to highlight the neglected problem of fungal infections to the Greater Manchester audience.

The Manchester Science Festival runs from 19-29 October at venues across the region and the Killer Fungus exhibition will be a Platform for Investigation event on Tuesday 24 October at the Museum for Science and Industry.

About the Aberdeen Fungal Group

The Aberdeen Fungal Group is one of the largest medical mycology groups in the world. Its scientists are internationally recognised leaders with a uniquely broad scope of activities.
In February 2016, the MRC Centre for Medical Mycology was created at the University of Aberdeen to spearhead innovative research and training to generate knowledge that will improve the diagnosis, prevention and treatment of fungal diseases. The centre is the first MRC Centre dedicated to the field of medical mycology.

About the Manchester Fungal Infection Group

Founded in 2013 with a multi-million pound investment from the University of Manchester, the MFIG mission is “To understand and reduce the burden of human fungal disease”.  Wellcome Trust and MRC funding to MFIG scientists is currently supporting gene-by-gene scrutiny of the Aspergillus fumigatus genetic code in search of new drug targets. Manchester is also the home of the UK National Aspergillosis Centre headed by Professor David Denning and the Mycology Reference Centre Manchester, headed by Professor Malcolm Richardson.