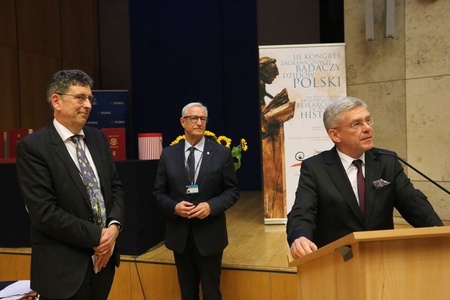 The School of Divinity, History and Philosophy is pleased to announce that Professor Robert Frost has been awarded a major prize in Poland for his book, the Oxford History of Poland-Lithuania, vol. 1 The Making of the Polish-Lithuanian Union, 1385–1569 (Oxford University Press, Oxford, 2015). The award, the Pro Historia Polonorum prize, is conferred every five years by the Polish Historical Association for the best book on the history of Poland or East Central Europe written in a foreign language by a non-Polish author published between 2012 and 2016 . The prize, worth 20,000 złoties (£4,000) is funded by the Polish Senate, and was presented by the Marshal of the Polish Senate on Wednesday 11 October at the opening ceremony of the III Congress of International Researchers of Polish History in Cracow, in which 250 historians from 37 countries are taking part. The book was chosen from among 165 nominated by Polish historians.

In the attached photo, the small statuette Professor Frost is holding is of the Anonymous Gaul, a foreign monk, probably from France, who wrote the first chronicle of Polish history.