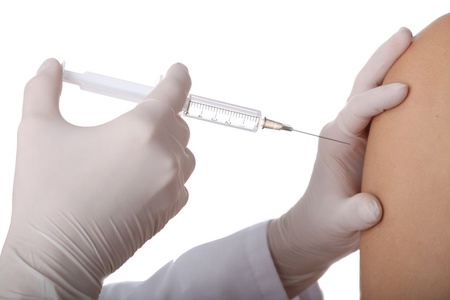 The number of young Scottish women showing early signs of potential cervical cancer have almost halved since the introduction of a school vaccination programme.

The research by the University of Aberdeen suggests the vaccine against Human Papilloma Virus has seen a significant reduction in abnormal cervical screening tests 20 years earlier than anticipated.

The study analysed the number of women in Scotland involved in the catch-up programme, aged 20 or 21 years old, who were referred to colposcopy - a procedure used to look at the cervix if cervical screening finds abnormal cells. It found that 1294 women were referred for a colposcopy in 2008-2009 due to an abnormal screening smear, compared to 758 women in 2013-2014 – a reduction of 41%.

The study published in the BJOG (An International Journal of Obstetrics & Gynaecology) analysed trends in the numbers of Scottish women referred from the cervical screening programme for a colposcopy examination.  The colposcopy is a test used to find pre-cancerous cells on the cervix and although it is an effective intervention for cancer prevention, negative effects can include pain, infection and in some cases after further treatment, women may be at higher risk of pre-term labour in future pregnancies.  Results of this study showed that the group who had been offered the vaccine showed a significant reduction in not only colposcopy, but also medical interventions and treatment compared to those who had not been offered the vaccine.

The UK government introduced the school-based vaccination program in 2008 for twelve and thirteen year old girls to protect from HPV virus and specifically against HPV 16 and 18, which cause at least 70% of cervical cancers.  The government also offered a three year catch-up programme for girls up to 18 years of age.  Uptake of the vaccine in Scotland is currently among the highest in the world, with around 90% of girls opting to receive it.

...we're showing that the vaccination is not only protecting against cancer but also, the immediate risks of the colposcopy and longer term, hopefully the increased risk of pre-term labour." Professor Maggie Cruickshank

Professor Maggie Cruickshank, from the School of Medicine and Medical Science and Nutrition at the University of Aberdeen, and who led the study,  explained: “We thought it might take twenty years to see the benefits of HPV vaccination as it would take time to reduce levels of HPV infection - the virus that causes abnormal cells to develop. But this data shows that we’re already seeing a significant reduction in colposcopy and subsequent treatment for pre-cancer.

“This is great news for women as this means they can avoid the short term negative effects of colposcopy such as pain and bleeding, but also longer term, there are concerns that some women treated for pre-cancer changes can have an increased risk of pre-term labour.  So we’re showing that the vaccination is not only protecting against cancer but also, the immediate risks of the colposcopy and longer term, hopefully the increased risk of pre-term labour.“

Professor Mary Ann Lumsden, Senior Vice President of the Royal College of Obstetricians and Gynaecologists (RCOG), added: “Cervical cancer is the second most common cancer in women below the age of 35. Each day in the UK, nine women are diagnosed with cervical cancer – a largely preventable disease thanks to cervical screening and the HPV vaccination programme.

“We welcome these extremely encouraging results which reveal a reduction in the number of young women being referred for a colposcopy with early signs of potential cervical cancer – this is most likely due to the HPV vaccination programme’s success. We encourage all girls aged 12 and 13 to take up the vaccine. “