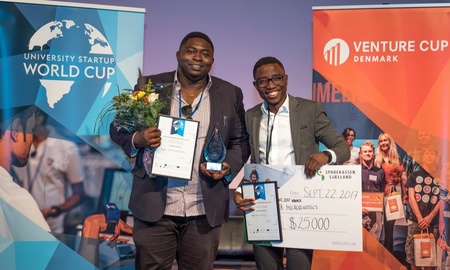 A University startup has taken the top award in an international competition held to recognise innovation and entrepreneurship.

RAB-Microfluidics was crowned overall champion at the University Startup World Cup 2017, held in Copenhagen.   As well as beating 70 other entrants to take the top prize, the startup came out on top in the competition’s High-Tech category.

The company was formed by Rotimi Alabi, a former PhD student in the School of Geosciences, who is receiving support through the University’s ABVenture Zone to develop the business.

The standard of competition was so high we didn't think we stood a chance, but here we are! " Rotimi Alabi

Speaking after receiving the award ceremony, Rotimi said: “It is an amazing feeling to have won, especially as we never expected to. The standard of competition was so high we didn’t think we stood a chance, but here we are!”

The University Startup World Cup is organised by Venture Cup, a Danish non-profit organization whose mission is to identify and develop the talents and technology of tomorrow.

Congratulating RAB-Microfluidics on its success, Venture Cup CEO Human Shojaee said: “Their idea is absolutely outstanding because of its overwhelming business potential. It is incredibly usable for some of the biggest players in the wind, drilling, and shipping industries.”