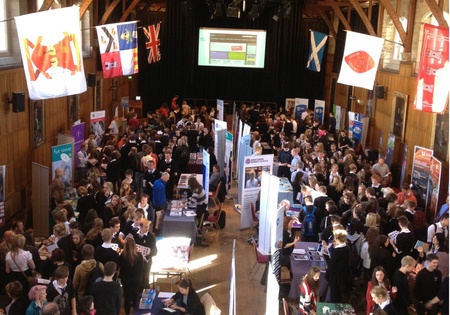 Anyone interested in studying at university or college is being invited to an event that will take place at the University of Aberdeen later this week.

Around fifteen hundred prospective students and their families are expected to descend on Old Aberdeen for the annual UCAS higher education exhibition, which takes place on Wednesday and Thursday (September 27 and 28).

The free event – held in association with UCAS and Skills Development Scotland (SDS) – is intended to arm potential students with information on all aspects of higher education, including key facts on topics such as applying to study, career prospects and financial help.

The exhibition also gives visitors the chance to compare and contrast courses in one place at one time.

North East Scotland College and all of the universities in Scotland will be represented, along with English universities including the University of Oxford, and Imperial College London.

The convention is not just for secondary pupils - it's aimed at anyone of any age with an interest in further or higher education" Fiona MacMillan, Student Recruitment and Admissions Service, University of Aberdeen

Fiona MacMillan, from Student Recruitment and Admissions at the University of Aberdeen, is one of the convention organisers.

She said: “Every secondary school in Aberdeen and Aberdeenshire has been invited to attend the convention which is a fantastic opportunity to find out more about further and higher education.

The Aberdeen UCAS Higher Education Exhibition takes place at Elphinstone Hall on the University’s King’s College campus between 4.30pm and 6.30pm on Wednesday, September 27, and between 9.30am and 12 noon and 12.30pm and 2.30pm on Thursday.

*Further information, including details on how to register, is available here