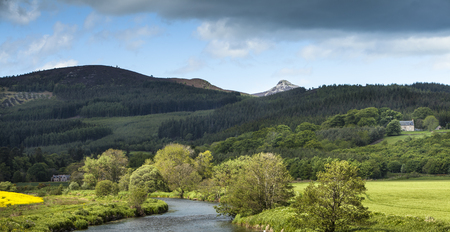 Members of the public will have the opportunity to learn about the Bennachie colonists at a unique performance being held on Sunday, September 10.

The Day the World Changed, is a promenade drama, which means members of the audience will follow the performance whilst doing a walking tour around the lower slopes of Bennachie.

The production, which is produced by Will Barlow from the University of Aberdeen and Tony Goode of Out of the Blue, highlights the lives of the people who lived and worked the land on Bennachie in the 19th century. Based on recent research by members of the Bailies of Bennachie, the performance will bring to life the Colony settlement through stories, music and dance, based on one particular day in 1860.

Audiences will be guided through the wood and will come across various scenes about the Bennachie colonists along the way.

The production is part of the Enacting the Past Project, led by Dr Liz Curtis, from the University of Aberdeen in partnership with the Bailies of Bennachie and the Scottish Traditions and Culture group in Aberdeen

Dr Curtis commented: “This performance on September 10 aims to engage new audiences in the history and culture of the people who built and lived in the colony on Bennachie. The production of The Day the world changed has brought together performers, musicians, writers and dancers including the Polish Scottish Song and Story group with members of the Bailies of Bennachie to explore and reinterpret the rich history of the hill.”

This performance on September 10 aims to engage new audiences in the history and culture of the people who built and lived in the colony on Bennachie." Dr Liz Curtis

Jackie Cumberbirch, Chairperson of the Bailies of Bennachie added: “We hope lots of people book to attend this one off event as we want people to find out more about Bennachie’s interesting history in a new way.”

Tickets cost £3 each and booking in advance is advised due to limited numbers available at each performance. Outdoor clothing and footwear are strongly recommended.

Tickets can be purchased from the Bennachie Visitor centre by phoning 01467 68140 or email bennachie.warden@aberdeenshire.gov.uk

This project has been made possible through funding from the Arts and Humanities Research Council’s Creating Living Knowledge fund for Impact and Public Engagement and the hospitality and support from Jan Lythgoe and her colleagues at the Benanchie Visitor Centre.