You are when you eat? Could a bigger breakfast be the key to losing weight
31 July 2017 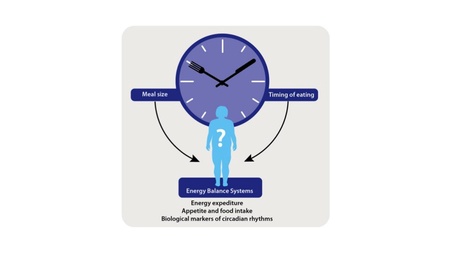 Scientists at the University of Aberdeen Rowett Institute and the University of Surrey, have received nearly £800,000 from the Medical Research Council to investigate whether the time of day we consume the most calories has an effect on weight loss.

Researchers, led by Dr Alexandra Johnstone from The Rowett Institute, will examine how the timing of eating affects an individual’s level of energy expenditure, with a view to shedding light on whether there is an optimum time to eat in order to manage weight.

Previous studies have shown that ‘evening eaters’ have a greater likelihood of putting on weight and are less able to lose it. However until now, studies in overweight and obese males and females, comparing the impact of breakfast versus evening meal have not yet been conducted in the UK.

The team’s research will directly assess this evidence gap and give key insights to the role of timing of eating and the distribution of calories throughout the day on energy expenditure, energy balance and body weight.

Dr Johnstone said: ‘We are interested in how meal size affects energy metabolism related to digestion and absorption at different times of the day. It might be that the human body responds differently, related to the normal hormone release linked to our circadian rhythm – this is the normal ebb and flow of hormones related to the natural light cycle over a 24 hour period.

“Diets are generally governed by the basic principle that calories are calories regardless of what time of the day they are consumed. Recent studies suggest that calories are used more efficiently when consumed in the morning as opposed to the evening, and we believe that this could be used to develop new strategies for tackling weight loss.

Diets are generally governed by the basic principle that calories are calories regardless of what time of the day they are consumed." Dr Alexandra Johnstone

“In this study we will conduct a randomised crossover trial where individuals will consume two controlled diets each for four weeks, with a one week break in between.

“45% of calories will be given either in the morning or in the evening, with the same composition of protein, fat and carbohydrates.

“Participants in the study will be monitored at the state of the art Human Nutrition Unit at The Rowett Institute; body composition will be measured by our Bod Pod for monitoring changes in fat mass and fat-free mass. Subjects enjoy participating in our diet trials as all food is provided and they find it easy to lose weight."

Dr Jonathan Johnston from the University of Surrey said: “This exciting project will help us to understand why eating at certain times of day can influence body weight regulation.

“We hope the research will help people to make simple behavioural changes to improve their body weight and metabolic health.”