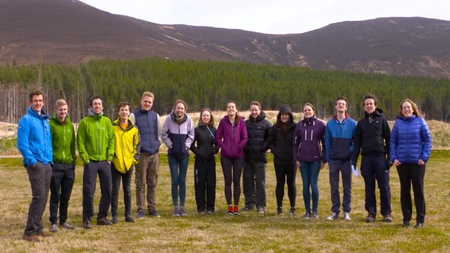 Medical students at the University of Aberdeen have been given a taste of rural life as part of a new drive to address Scotland's rural GP shortage.

The declining number of doctors joining practices in non-urban areas is well documented with many areas facing the prospect of having no family doctor in the near future.

A new initiative by the University of Aberdeen, made possible by a donation from Mr Joe Officer, saw 14 first year medical students taken on a two day adventure to Cairngorm national park and the surrounding area, to speak to those working in rural practices and to see first-hand the benefits of living and working in the countryside.

As part of the trip students were taken on-board the search and rescue helicopter and spent one-to-one time with GPs who work in rural practices to find out the extent of what the job entails.

In addition to seeing first-hand the demands and variety involved in being a rural GP, the students also got to sample some of the many outdoor pursuits available to people living in the area, including mountain biking and kayaking.

One of the students, Conor McAvoy, said: “I was really amazed to see the wide range of services they were able to offer in such a relatively small village. It was also great to see how much contact you get with your patients in these areas. You really are part of a community, it seems.

"It’s certainly given me a lot to think about, as I’m already starting to think about what I want to specialise in, so becoming a rural GP is definitely an option to consider.”

I was really amazed to see the wide range of services they were able to offer in such a relatively small village. It was also great to see how much contact you get with your patients in these areas. You really are part of a community, it seems." Conor McAvoy

Another student, Alice Jones, added: “It was great to do all these activities like mountain biking and canoeing. Things you couldn’t do that easily if you work in a city. Here, it’s right on your doorstep. Having that access to the outdoors is definitely a big plus.

“I also learned that there’s much more to being a rural GP than I realised. The facilities were bigger and better than I’d anticipated and the role seems very varied.”

Dr Linzi Lumsden, a GP and Senior Clinical Lecturer at the University of Aberdeen said: “Currently there are fewer medical students choosing to become GPs than we require and even fewer are joining practices in rural areas.

“We know there’s a few key things students feel are important such as early exposure to specialties so we’re trying to show them the benefits of choosing this path.

“Many of them won’t know there are these practices out there and that there’s an opportunity to manage patients in a ward setting.

“I think they really valued the one-to-one chance to speak to the GPs and hear what life is like living and working here and as the trip went on, people who were a bit unsure, or more on the fence had certainly warmed up to the idea of General Practice and the possibility of doing it in a remote location.”

A video of the students’ experience has been created and will be presented at the RCGP (Royal College of General Practitioners) Annual Conference 2017 in Liverpool in October.